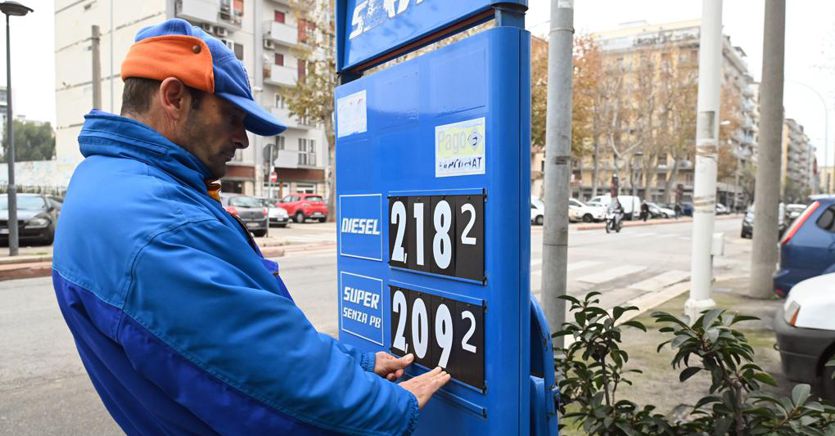 The issue of expensive fuel has resurfaced in recent weeks after alarms over alleged speculative price maneuvers in the wake of the government’s decision to halt production tariff cuts decided by the former executive. But what exactly are we paying for when we refuel our car at the gas station? To answer the question, it is useful to start from the most recent prices photographed by the Ministry of the Environment and Energy Security which records the weighted average of the prices applied by companies each week: between January 1 and January 8, petrol in self-service mode from 1.644 euros to 1.812 euros per liter with an increase of 16.8 cents, while the diesel price increased from 1,708 euros to 1,868 euros, an increase of 16 cents.

So let’s start with petrol and the value depicted by Mase: this bar, which equals 1.812 euros, consists of 58% of the tax component (VAT and excise duty) and the remaining 42% of the industrial price. The industrial price includes all costs associated with raw materials (equal to 0.548 €), plus costs for the structure (logistical, commercial and administrative), plus the manager’s margins. This last piece thus includes distribution chain revenue which often ends up in the dock as the main culprit for price hikes at the pump.

Gross margin is used to cover all primary and secondary distribution costs, but also other fees, such as taxes and fees. And in this last part, which represents just under 12% of the total amount paid at the pump by motorists for petrol and about 8% for diesel, the operator can intervene to change the price. While on raw materials, it equals 30% of the total cost for petrol and 41% for diesel, international price quotations and the law of the effect of the euro/dollar exchange.

READ  Abandoned in a barn for 50 years, this Ferrari is worth millions but was in poor condition

The fuel benchmark is in fact the international prices for refined products (the so-called Platts SafeMed), which are valued at the euro/dollar exchange rate of the reference day. So, if the relationship is biased towards the US currency, this ends up affecting the price. From the end of November until today, the Platts petrol price has fallen by around 6 euro cents per litre, a decline more than absorbed by industrial prices which have in turn fallen by 12 cents. While, on the diesel front, the index shrank by 4 cents, and industrial prices fell by 14 cents downstream. This reduction essentially made it possible to counteract the first reduction in the fuel rebate that was decided by the government at the end of November.

The effect of management costs on highway prices

As for the prices noted on the motorway network, which are on average higher, it must be borne in mind that the lifts operate 24 hours a day. Thus, the management costs that are reflected in the industrial price are higher, plus there are royalties to be paid to the divisional franchisor. However, peaks of €2.5 per litre, reported by consumer associations, represent isolated cases rather than the reality of the market.