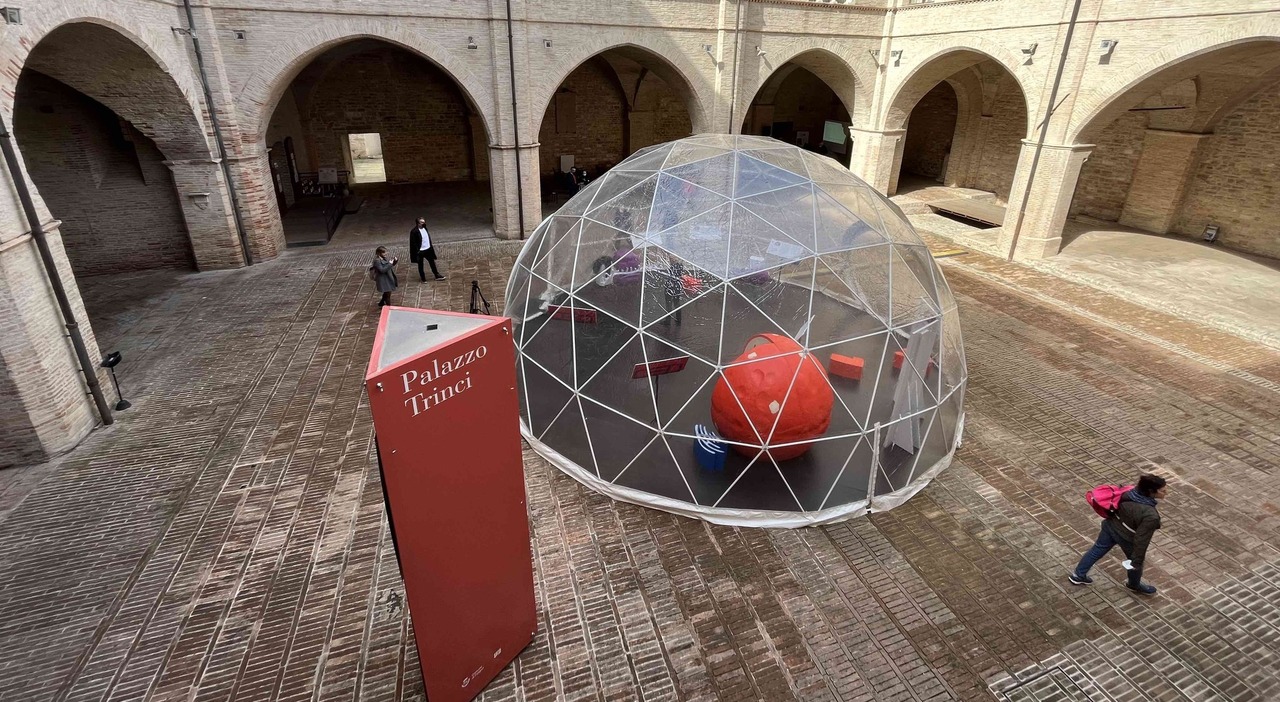 FOLIGNO – A journey inside the human cell to discover and learn its secrets from all its parts. It is an innovative and unique project being promoted by the Laboratory of Experimental Sciences in Foligno on the occasion of the 11th edition of the “Festival of Science and Philosophy”, which will take place from 21 to 24 next April. Titled “Let’s Get Into Our Cell,” the remarkable novelty of 2022 is the superlative installation of Cellulaessenziale® in the outdoor patio of Palazzo Trinci, in Foligno, open from Saturday 9 April to Sunday 1 May.

In detail, the project saw the creation of a transparent dome representing the cell membrane containing the nucleus, endoplasmic reticulum, mitochondria and ribosomes. Once inside, visitors will be able to follow the main stages that characterize cellular metabolism. While outside, under the arches of the historic Foligno building, computers will be located through which insights into biology will be presented to the public, and workstations that will allow, thanks to the viewers, to experience immersive innovative technologies. In short, a real virtual tour with the guidance of attentive teachers who will accompany adults and children on a real journey between the various cellular organs. A journey that will be repeated, in real time, even on screens installed in the same courtyard.

Sponsored by the Laboratory of Experimental Sciences in Foligno, the project saw a collaboration between the Leonardo da Vinci Technical and Technological Institute, the Classical High School Fritzi-Beta Angela, the ITS Umbria Academy, and the Education Direction of the Third Circuit. In addition, the municipality of Foligno, Confindustria Umbria – Foligno and several companies in the area also contributed.

The project “Let’s Get into the Dungeon” was presented during a conference on the morning of Friday 8 April, in the outside courtyard of Palazzo Trinci, where the base cell was installed. To clarify its properties and properties, curators Corrado Morichi and Mario Tai spoke, who spoke about the importance of the cell itself, but also about models applied to the scientific method. In addition to the physical context in which it is placed, thanks to the work of the architect Giacomo Sana. “We are facing a futuristic dome – explained Corrado Morici – which is part of a project that will allow all visitors, children and adults, to experience a real journey in space but also in time.”

Head and Director of the Laboratory of Experimental Sciences in Foligno, Professors Maurizio Renzini and Pierluigi Mingarelli, Mayor of Foligno, Stefano Zuccarini, Education Adviser of the Municipality of Foligno, Paola de Bonis, General Secretary also spoke. The Foundation, Cassa di Risparmio di Foligno, Cristiano Antonietti and Giuseppe Metelli, have been among the promoters of the Festival of Science and Philosophy since its inception. She also attended some Ite “Scarpellini” classes, with students illustrating the survey conducted in 2019 to find out the numbers and users participating in the Festival of Science and Philosophy.

Pierluigi Mingarelli, Director of the Laboratory of Experimental Sciences – “Today we present a unique initiative, contextualized as the Palazzo Trinci courtyard, which allows us to combine the modern with the ancient. This initiative is made possible thanks to the cooperation between the Municipality of Foligno and the Casa di Risparmio di Foligno and the valuable contribution schools and businesses in the area.

Maurizio Renzini, Head of the Laboratory of Experimental Sciences – “We are in the stage of renewal after the difficulties we encountered during the pandemic which, however, did not prevent us from continuing our mission. This eleventh edition is characterized by a very rich program of conferences and side events, which will also and above all involve students , who will be not only users, but real heroes, because they will help us take care of the whole gamut of activities through alternating schoolwork projects. ”

Stefano Zuccarini, Mayor of Foligno – “Seeing a structure as advanced as the one before us today in the heart of the city’s tradition is a unique experience, a perfect combination of our past and what lies ahead. This will give the project an added value for an event such as the Festival of Science and Philosophy, whose validity is considered Its significance is fundamental to the city. We are honored to be able to host an event like this and as administrators we will always be close to it.”

Paola de Bonis, Education Counsellor, Municipality of Foligno – “The Festival of Science and Philosophy is a wonderful event, in which I had the pleasure to take part in following all the organizational stages, to the point of feeling part of this family. Seeing something as important as the cell being realized in this The beautiful place is a unique opportunity. Just as I consider the involvement of young people essential. This festival has the advantage of effectively spreading scientific culture among our children, and helping them develop their critical spirit.”

READ  Juventus Sampdoria U-16 Report Card: Finocchiaro is a magician, the flag is swinging

Cristiano Antonetti, General Secretary of the Cassa di Risparmio di Foligno Foundation – “The Foundation has supported this event since its first edition and we are satisfied with the results achieved, both nationally and abroad. Another essential aspect of the Festival of Science and Philosophy is the participation of children, an aspect that our organization has always been in The cutting edge of training and education. This is also because we are convinced that knowledge is essential to reduce, especially today, the differences among our youth.”