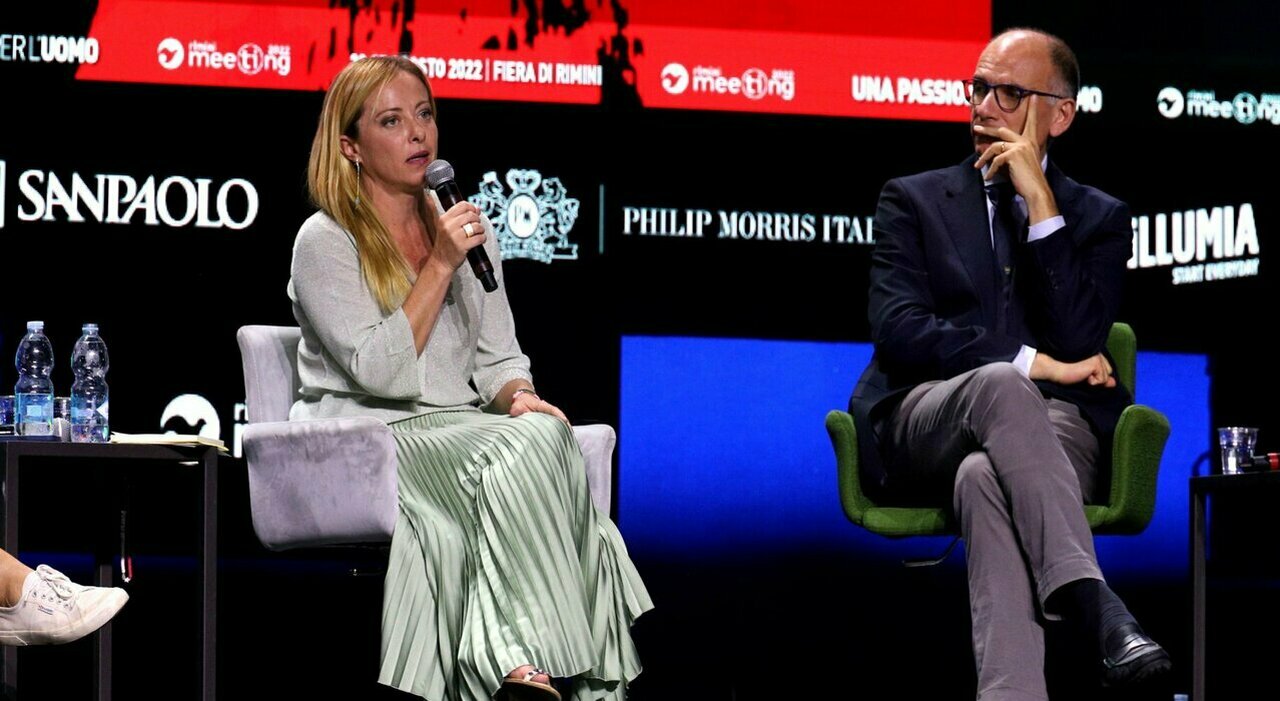 L ‘Agcom Refuse to compare TV between Enrico Letta And the Georgia Meloni. Confirmation comes from the Communications Authority meeting. A two-way debate between the secretary of the Democratic Party and the head of the Fdi, such as that already mentioned Porta a Porta, Rai1 radio directed by Bruno Vespa, would infringe Equal chancesLet the power know. Thus it will trigger the relative elements to run Penalties.

A two-way discussion between the Democratic Party secretary and the FDI chief “is not in keeping with the principles of equal treatment and impartiality of information,” the authority says in a memo, as it could lead to “undue electoral advantage” for the contestants. Agcom called in the decision all “television and radio broadcasters” Patriotism” calls for “respect” in a strict manner and with immediate effect “the equal treatment of political subjects, with regard to speaking time and news time.” He recommends “paying special attention to lists attributed to the two competing coalitions” to ensure “a proportional, complete and impartial representation of the various political narratives” of the electorate.

Thus, the direct confrontation between the leaders of the two largest alliances vanishes. «Okay AGCOM! We were right to raise this issue. Now let us organize a real and dangerous confrontation as in all civilized countries,” tweeted Carlo Calenda. But for the Democratic Party, the game is far from over. “It therefore seems possible to make comparisons between two leaders, as well as between several leaders, provided that this formula does not end in one confrontation, since the format is expected with the participation of only two by the editorial independence of the broadcaster. Themes and one continuous communication”, explains Antonio Nisita, Senate candidate for the party Democrat and former AGCOM Commissioner.

A duel sought and wanted by Lita and Meloni and opposed by most other parties. Starting with Terzo Polo by Matteo Renzi and Carlo Calenda. “Sandra and Raimondo want to continue this disgusting series – which has stunned the leader of the movement in recent days – accepting dictates from two of the four leaders of the coalition is a violation of the equal treatment offered by the media in every democratic country.” While former Prime Minister Renano Solarno suggested a confrontation between Meloni, Conte, Lita and Calenda, “Italians should know who is more credible.”

Instead of a clash between the two sides, the AGCOM decision ruled, there should be a debate between all the leaders of the main lists. Which? The criterion is set by the Parity Law (28/2000) which speaks of “competing coalitions and lists that have presented candidates in constituencies or districts comprising at least a quarter of the electorate invited for consultation, without prejudice to the “possible” existence of political subjects representing recognized linguistic minorities Subject to the applicable electoral system and the regional context of reference.

Last Monday Agcom – announcing a meeting this afternoon – had already hinted at the line in a two-way challenge between Meloni and Letta on TV in the Vespa living room. Noting the commitment of “public and private radio and television broadcasters” to ensure “all political subjects, impartially and impartially, and equal treatment in access to information and political communication”; Vespa’s proposal – willing to interview political leaders individually for half an hour each – has joined in recent days the proposal of Tg La7 director Enrico Mentana with a collective call for all leaders for a simultaneous discussion.