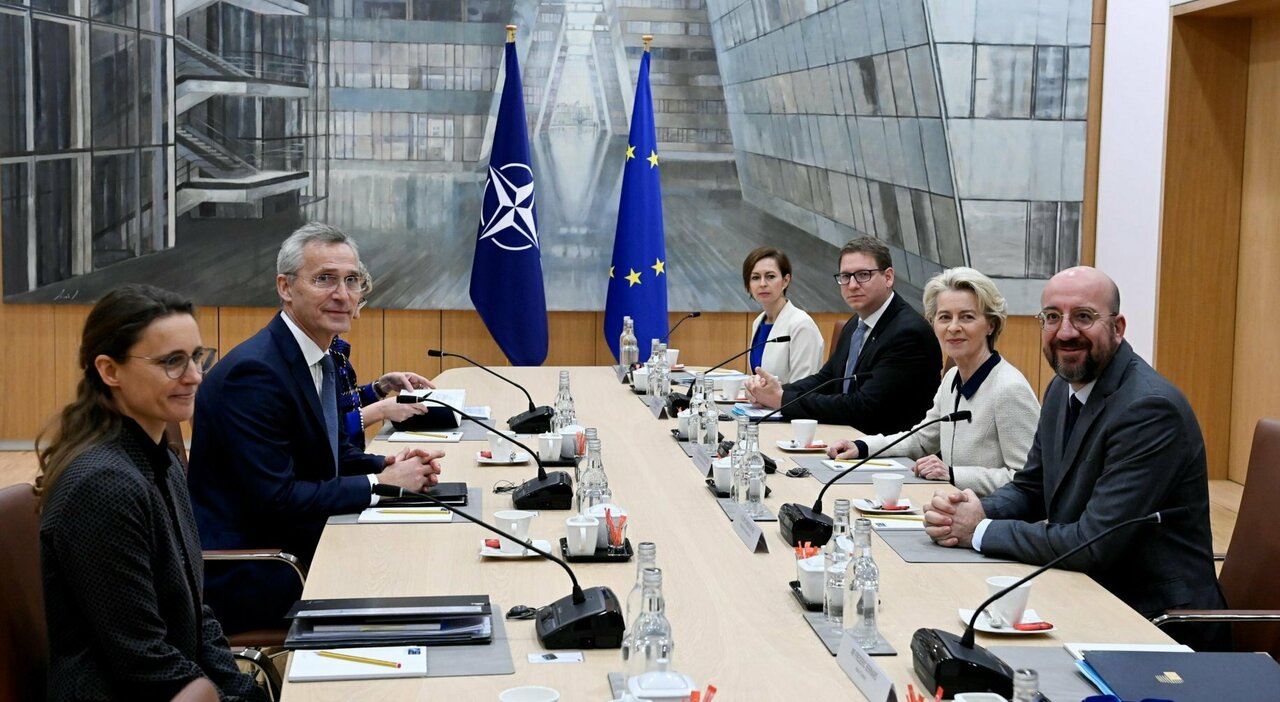 More military aid to Ukraine, more EU-NATO cooperation, greater push for the defense industry: On the third EU-NATO joint declaration day, Jens Stoltenberg, Ursula von der Leyen and Charles Michel are the first to all make one point clear: Volodymyr must Zelensky will send the weapons Kyiv deems necessary, including Leopard battle tanks. The axiom of cooperation between the European Union and NATO, in the short and medium term, remains as follows: help Ukraine without losing sight of the fact that the war could continue for a longer period. In the document that renewed the Atlantic alliance, extending it to sectors such as space, strategic infrastructure, mixed warfare and disinformation, no stop was specified in the flow of weapons being sent by the West to Ukraine. The regime in Moscow wanted to divide us and failed. We must continue our transatlantic alliance, EU-NATO cooperation and strengthen our support for Ukraine, said the NATO Secretary General, in announcing a new meeting of the contact group in Ramstein next week. Where the allies will hear from the Ukrainians themselves what weapons they need. Rumors leaked in recent days by Berlin about sending the Leopard were not explicitly mentioned. However, the message from NATO, and above all from the European Union, is very clear. Von der Leyen stressed that “Ukraine must be supported with all the weapons it needs to defend its territory and international law, including advanced air defense systems, as well as other categories of advanced military equipment.” Words that, most likely, will not go unnoticed even in Italy, which is grappling with the sixth package of weapons that will be sent to Kyiv. Of course, as the war drags on, so does the supply emergency. “That’s right, we’re out of them,” Stoltenberg admitted, but confirmed that stocks are already being replenished. “In the long term,” he explained, “the solution is to increase production.” A dedicated task force, in coordination with European defense agencies, “to understand how stocks are filled and what the defense industry needs,” explained von der Leyen, stressing how, in parallel, Brussels pressure on the Kremlin will remain high. And the announcement of new sanctions on Iran and Belarus, “which support Moscow militarily.” And the third joint declaration, consisting of 14 points and signed in Brussels at NATO headquarters, affirms in no uncertain terms that “this is a key moment for Euro-Atlantic stability.” The EU’s strategic independence project, in the military sphere, can only suffer from this. “NATO remains the cornerstone of the collective defense of its allies and is essential to Euro-Atlantic security,” the document stated.

CNN Russian Russian artillery fire decreased by up to 75%

US and Ukrainian officials told CNN that Russian artillery fire has decreased sharply since its peak, by as much as 75% in some areas. There is speculation that Russia may be rationing artillery fire due to a shortage of supplies, or that the decision may be part of a broader reassessment of tactics in the face of a successful Ukrainian counterattack. In any case, the marked decrease in artillery fire is further evidence of Moscow’s increasingly weak position on the battlefield nearly a year after the invasion, the sources indicated.

Ukrainian soldiers in the United States to train the Patriot

Laura Cooper, the US undersecretary of defense responsible for Russia and Ukraine, said that training Kyiv soldiers on Patriot missiles would continue for “several months.” Joe Biden announced the defense systems during Ukrainian President Volodymyr Zelensky’s visit to Washington on December 21.

CNN: “Russian artillery shelling decreased by up to 75%”

US and Ukrainian officials told CNN that Russian artillery fire has decreased sharply since its peak, by as much as 75% in some areas. There is speculation that Russia may be rationing artillery fire due to a shortage of supplies, or that the decision may be part of a broader reassessment of tactics in the face of a successful Ukrainian counterattack. In any case, the marked decrease in artillery fire is further evidence of Moscow’s increasingly weak position on the battlefield nearly a year after the invasion, the sources indicated.

“During the day alone, Solidar and the surrounding areas were subjected to 86 Russian attacks with various artillery systems,” the head of the Eastern Group of the Armed Forces of Ukraine, Sergey Sherevaty, was quoted by Ukraine’s channel Ukraine. In a town 10 kilometers north of Bakhmut – Moscow’s main target at the moment – a battle rages between Ukrainian forces and mercenaries from the Wagner Group led by Yevgeny Prigozhin. “The enemy suffers heavy losses,” Cherevaty stated, “but try to push forward, even a small tactical advance is presented as a major achievement.”

Shoigu: We will continue to develop nuclear weapons

there Russia Today, Defense Minister Sergei said that his country will continue to develop nuclear weapons to ensure the country’s sovereignty Shoigu, quoted from tax. “We will continue to develop the nuclear triad and keep it combat-ready, because the nuclear shield has been and remains the main guarantor of the sovereignty and territorial integrity of our state,” Shoigu said. We will also increase the combat capabilities of the Air Force, both in terms of the operation of fighters and bombers in areas where modern air defense systems operate, as well as improving unmanned aerial vehicles.

Agreement between the European Union and NATO: more aid for Kiev

President Putin wanted to divide us, but he failed. The regime in Moscow wanted a different Europe, and this would have consequences for our security. Therefore, we must continue our transatlantic alliance, EU-NATO cooperation and strengthen our support for Ukraine. Jens Stoltenberg He explained that the third cooperation declaration between the European Union and NATO takes their partnership “to a higher level.” “We will deepen our excellent cooperation and expand it into new sectors,” said European Commission President Ursula von der Leyen.

Kyiv: bombings in Kherson, trunks also in Odessa and Mykolaiv

Strong explosions are taking place in Kherson this morning: “Another Russian bombardment of Kherson. “Attention, there may be frequent arrivals of missiles,” wrote the deputy head of the regional council Yuri Sobolevsky in Telegram, citing local media. Meanwhile, air warning sounded in the southern regions of Ukraine Odessa and Mykolaiv

Moscow: The conflict in Ukraine is a clash between NATO and Russia

“The events in Ukraine are not a clash between Moscow and Kiev, it is a military confrontation between NATO, led by the United States, England and Russia. Fearing direct contact, NATO instructors lead Ukrainian boys to certain death. With the help of a special military operation, Russia liberates its regions from occupation and must put an end to the bloody experience of the West to destroy the fraternal Ukrainian people. This was stated by the Secretary of the Russian Security Council Nikolai PatrushevPro-Vladimir put it inin an interview with the Russian newspaper Argumenty i Fakty.

“We are not at war with Ukraine, because, by definition, – says Patrushev, – we cannot have hatred for ordinary Ukrainians. Ukrainian traditions are close to the inhabitants of Russia, just as the heritage of the Russian people is inseparable from the culture of Ukrainians. Note that in Crimea The Ukrainian language is preserved as one of the state languages ​​».

Kyiv: 710 Russian soldiers were killed in the last 24 hours

In the past 24 hours, 710 Russian servicemen have been killed in Ukraine. This was stated in a Facebook post by the General Staff of the Armed Forces in Kyiv, which updates the number of Russian military deaths since the start of the war to 112,470.

Tajani: No holding back when handing over the anti-aircraft shield

«There are no brakes on the delivery of the air defense shield of Ukraine, we have voted to renew the authorization to send weapons to Kyiv in a European and NATO context, after reporting to Parliament. The shield project is Italian-French, we are working intensively with the French, there are technical problems to be solved, for non-bureaucratic military aspects, Defense Minister Crosetto is working, we are going ahead and there is no holding back. Foreign Minister Antonio said the General Staff is at work but it takes time » Tagani On the radio too.

Zelensky: In the land of Solidar, it is covered with corpses, but our soldiers are fighting back

“The battle for Donbass continues and although the occupiers have now concentrated their main efforts on Solidar, the result of this difficult and protracted battle will be the liberation of all of our Donbass.” The Ukrainian Prime Minister said so Volodymyr ZelenskyExplaining that the Ukrainian soldiers are increasingly resisting the intensified Russian attacks on Bakhmut, Solidar, Kremina and Svatov. “Thank you to all our soldiers who protected Bakhmut and showed maximum resilience. Thank you to all the soldiers of Solidar who are resisting the attacks of the new and toughest invaders. It is very difficult: there are almost no more complete walls… Thanks to the resilience of our soldiers there, in Solidar, we gained extra time and forces additional to Ukraine.” In those places, he added, “everything is completely destroyed, there is almost no life left” and “the whole earth under Solidar is covered with corpses.”

Kyiv: Zaporizhia has been attacked 600 times since the beginning of the year

The head of the regional military administration, Oleksandr Starukh, said Russian forces have attacked Ukraine’s southern Zaporizhia region more than 600 times since the beginning of this year, killing four and wounding seven. “Since the beginning of the year, there have been more than 600 attacks on peaceful cities and towns: four dead and seven wounded,” Starukh said, adding that yesterday the Russians launched 91 attacks in the region, 70 of which targeted civilian infrastructure in 19 villages. Starukh confirmed that the pro-Russian administration is trying to ban the circulation of the Ukrainian currency (hryvnia) in the occupied territories of the region. The Russians also introduced “passes” for the population, without which it was forbidden to move between occupied villages.

the United State They will consider the possibility of sending armored fighting vehicles Striker in Ukraine. Written by Politico, citing two sources close to the file, according to which the announcement could arrive next week, even if the final decision has not yet been made.