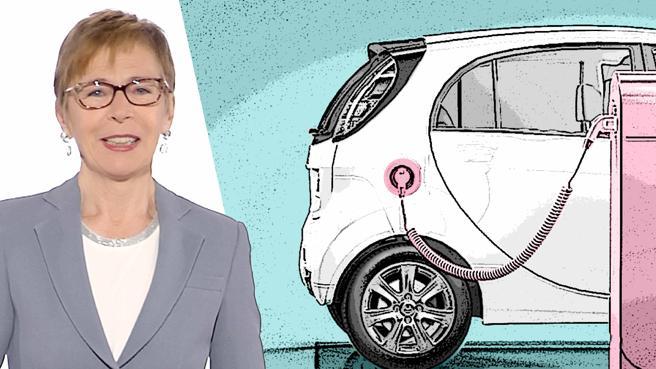 In Europe, cars with internal combustion engines will no longer be sold from 2035. Thus we are candidates to be the number one market in the world. for electric car. In 2030 Volkswagen expects 50% of its sales to be electric cars, Toyota 30%, Renault 90% and Stellants 70% in Europe and 40% in the United States. Change includes billions of dollars in investment, public and private, to start battery production, equip the territory with charging stations and significantly increase energy production from renewable sources. We know that too In Italy, with diesel and gasoline engines out, more than 70,000 jobs will be lost So, what are we doing to create jobs in the emerging field of mobility?

Electric cars circulating in our country today are 236 thousand eAccording to forecasts reported in Brussels, They will be 6 million by 2030 and 19 million by 2050. It is estimated that a minimum of 10 TWh of energy is needed annually to charge 6 million electric vehicles, out of a total energy consumption of 330 TWh. Instead, to charge 19 million electric cars in 2050, more than 32 TWh would be needed, but in the meantime, total requirements would rise to 650 TWh annually. It means that charging electric vehicles in 2030 will account for 3% of the country’s total energy consumption, while in 2050 it will rise to 4.9%. Not overly burdensome weight, the real point is that To resist switching, power availability must be doubled, since everything will work with a power outletIncluding boilers. And If we want electric cars to be zero-emissions, they must be powered by renewable sources. Our energy mix today is among the best in Europe with 38% of energy coming from renewables, but to reach 72% by 2030 it is essential to implement Mite’s plans immediately. 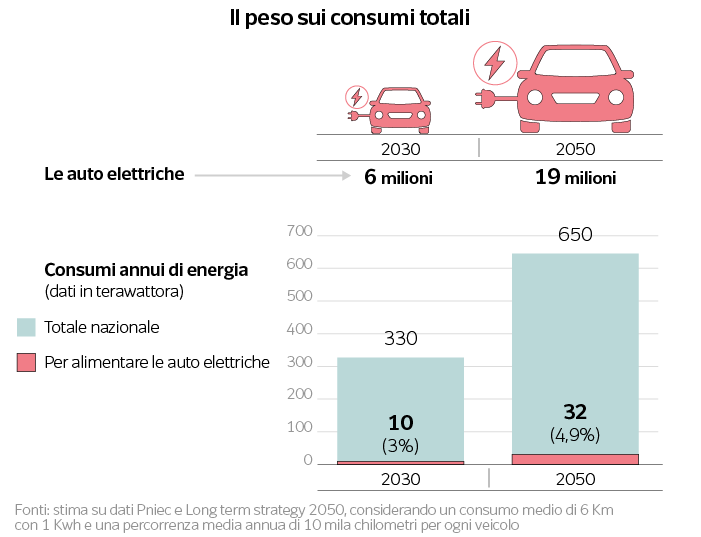 The network must also be able to withstand moments of greatest absorption during the day. Today we have daily peaks of about 55 gigawatts. With six million small-displacement electric cars in charge, which alone pulls at 22 gigawatts, we’ll have to maintain much higher peaks, or else the system will bypass, just like at home when you plug your washing machine and dishwasher together. This means that we need to find a way to store the energy produced by renewable energy sources to get it out when needed. We try to make recharging smart by programming it within a certain time, with the car running the uptake: at peak moments it slows down the drag, or gives up power to resume later. But Technology still taking its first steps.

READ  What are they and how do they work

Today we have 26,024 charging points, and in 2030 it is expected to reach more than 3 million private points and about 100,000 public ones, of which about 31,500 are express freight (distributed to highways, highways and urban centers). In short, 21,225 will be added to those in existence today, funded by 740 million NRP which will be used to cover 40% of the investment as a non-repayable fund. The money will be spent by December 31, 2025, otherwise we lose it. However, the construction of the column grid is progressing slowly.

1) National map of public charging points is missing Without this survey it is difficult to map the new columns associated with Pnrr invites. The Ministry of Environmental Transformation has pledged to implement its decree by mid-March. 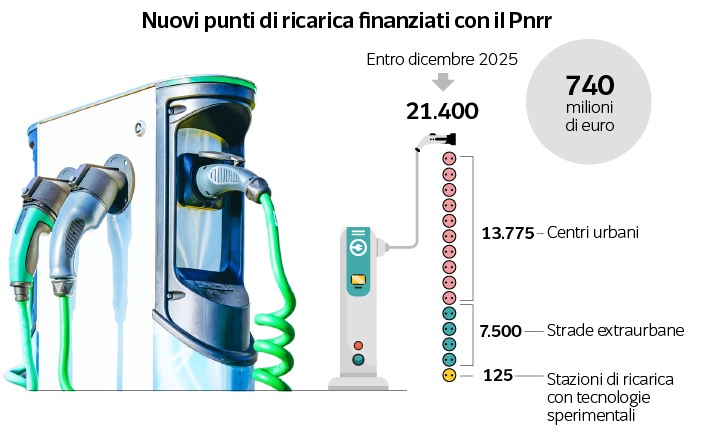 2) Today the connection may occur to a pole that does not recharge your car Because it belongs to a different operator than the one you have subscribed to. It is essential that operators enter into interoperability agreements.
3) Whoever installs the columns must request permission from the municipality, but there are 8000 municipalities and it is also expected that they do not have electricity. In fact, 13% of the infrastructure cannot be used. Municipalities will have to develop regulations with standard rules and in coordination with electricity grid operators.
4) Today there are only 90 highway recharging infrastructures. The 2018 regulation mandates the construction of a shaft every 50 kilometers, a total of 117 by 2023. There is no concessionaire to proceed with the tender, because the Transportation Regulations Authority last May took nine months to determine the tender schemes. It is now over, and if the competition is to be expected to have positive effects, then bidding should be mandatory.
5) Residential units: Installing a charging station in public areas or garages is still very complicated. Procedures are needed to facilitate the process.

Today 70% of batteries are made in Asia And 40% of the electric vehicle’s added value is in the battery. The new battery market in the EU is valued at €250 billion per year as of 2025 employment. The Boston Consulting Group for Motus-e estimates that reaching a production capacity of 740 gigawatt-hours by 2030 could lead to more than 60,000 new jobs. On December 28, Northvolt Ett produced the first European battery at the Skelleftea factory in Sweden. The market is there and there are major car manufacturers preparing to produce it as well, because from 2025 they are preparing to mass produce electric cars. In Europe, Germany takes the lion’s share with projects of 411 GWh of installed production capacity. Poland and Hungary are doing well, and they are also able to attract investment from Asian producers. Important: Batteries are also essential for storing renewable energy production and the work is expanding to the critical activity of recycling and testing. 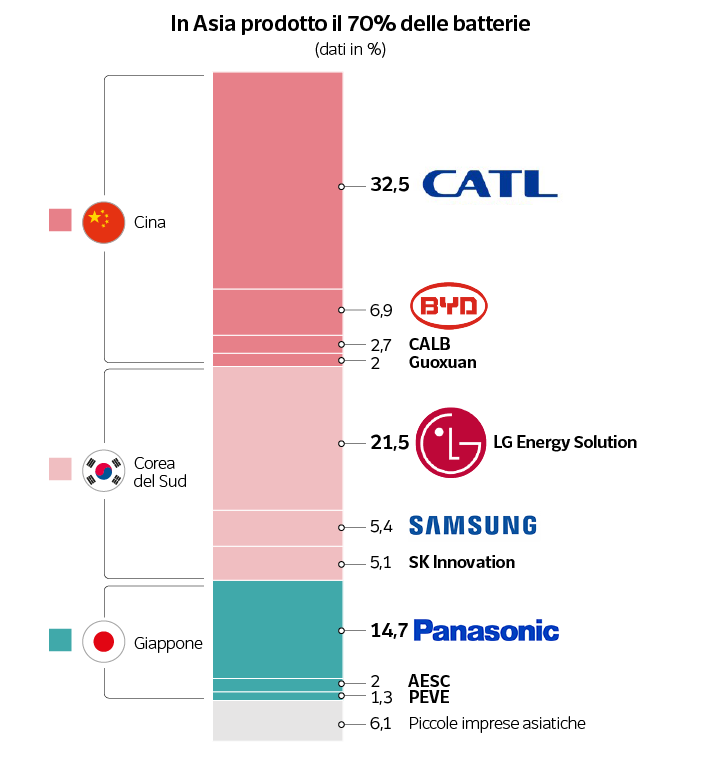 Today the only certainty is the 8 GWh that Seri Industrial is trying to install with the Faam project in Teverola (in the province of Caserta), But it’s not about car batteries, but for energy storage in homes, industrial and public transportation. It currently has 120 employees and is set to reach 800 by 2024. Ambitious Italvolt project in Scarmagno, near Ivrea: 3.4 billion investment, up to 70 GWh annually, 2024 production start-up and 3,000 jobs. At the moment, it is not yet clear who will put the money and who will buy the batteries produced. Stellantis plans to secure a final production capacity of approximately 260 GWh annually by building 5 GW plants in North America and Europe. In our country it was promised to build it in Termoli (Campobasso), but there is still no official approval. On paper, Fincantieri also plans to build a giant plant in Piedimonte San Germano (Frosinone) to manufacture lithium batteries for the new generation of electric cars, buses and commercial vehicles.

READ  Elon Musk has given up on buying Twitter 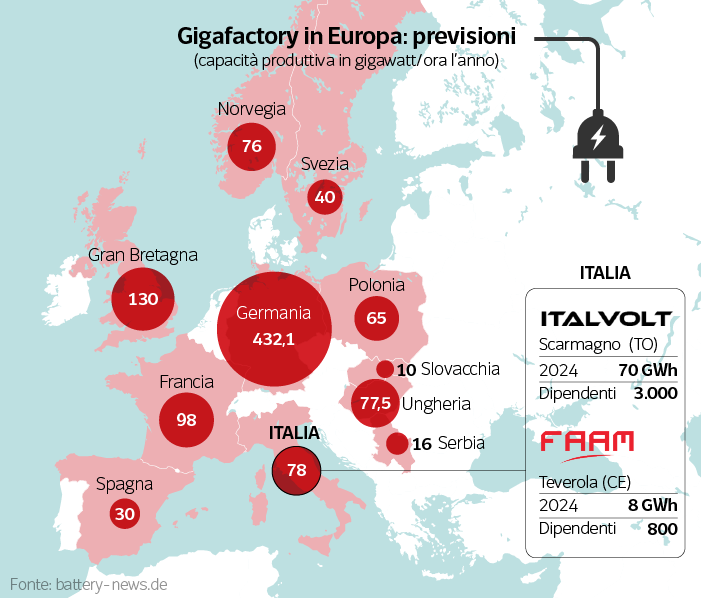 Federmeccanica, Fim, Fiom and Uilm have appealed to Prime Minister Draghi: Implement industrial policies to help bring back the coup!. It means finding mechanisms for financing investments: the transformation of a diesel carburetor plant into a factory that produces electric motorcycles requires significant capital, which is difficult to find in Italy. In order not to shut down, entrepreneurs have to get busy on their own and without knowing the country’s medium-term strategy. France and Germany have made plans for car transitions since 2019While our Ministry of Economic Development has been emptied of industrial policy experts. When Stellantis was born, also in 2019, the Italian state did not enter the shareholding structure as the French government did. Now Minister Giancarlo Giorgetti says Europe is to blame for stopping the internal combustion engine. But last December, Giorgiti’s Interministerial Commission on Environmental Transformation gave the green light to phase out from 2035. The only answer to the problemat the moment, Announcing the allocation of one billion euros for scrap old cars, But there is no vision for the future of the auto industry.