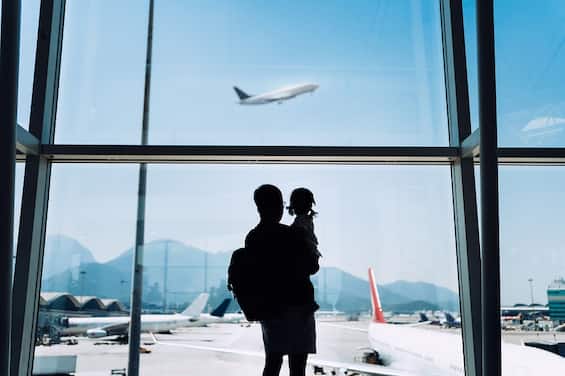 A touching story, that is CNN reports, it tells the story of a Canadian couple who, after being diagnosed with a disease that affects their vision, decide to take their children on a trip around the world. The daughter of Edith Lemay and Sébastien Pelletier, this is the name of the spouses, was only three years old when the parents first realized that their daughter Mia had vision problems. A few years later, their daughter, the eldest of four, was diagnosed with the disease Retina pigmentosa, a rare genetic condition that causes vision loss or deterioration over time. Later, the couple, who had been married for 12 years, realized that their two children, Colin (now seven) and Laurent (five), exhibited the same symptoms as their sister.

The parents’ fears came true in 2019 when both boys were diagnosed with the same genetic disease as Mia. “There’s really nothing you can do,” parents say, explaining that there is currently no cure or effective treatment to slow the progression of retinitis pigmentosa. “We don’t know how fast this will develop, but we should expect them to become completely blind by middle age.” After being forced to deal with the news of a definitive diagnosis, the couple focused on helping their children develop the skills they needed to navigate life on their own. When Mia’s specialist suggested allowing her to have “visual memories,” the parents wondered how to give her as much as possible. “I thought: ‘I’m not going to show her an elephant in a book, I’m going to take her to see a real elephant,'” the mother explains to CNN. “I will fill his visual memory with the best and most beautiful images I can.” So she and her husband immediately planned to spend a year traveling the world with their children.

“There’s nothing better than travel”


In retinitis pigmentosa, the light pulse technique has been successfully tested

The children’s father said he reviewed the family’s priorities after the diagnosis: “We have to do big things at home, but nothing is better than travel. In addition to landscapes, to get to know new cultures and people”. The family of six was due to leave in July 2020 after planning an extensive itinerary that included a trip to Russia and China, but was forced to delay the trip due to restrictions caused by the pandemic. They were able to move to Montreal in March 2022. “We really went out without an itinerary,” LeMay says. “We had ideas about where we wanted to go, but we’ll plan as we go.” Before leaving, the family made a list of must-do experiences on the trip. According to Lemay, Mia liked to ride a horse, while Laurent liked to drink juice on a camel. They visited Namibia, Mongolia and Indonesia. Lemay and Pelletier hope that traveling to different countries around the world and learning about different cultures will show them how lucky they are, despite the challenges that may arise when their vision deteriorates later in life. “I wanted to show them that no matter how hard their lives are, they are lucky.”