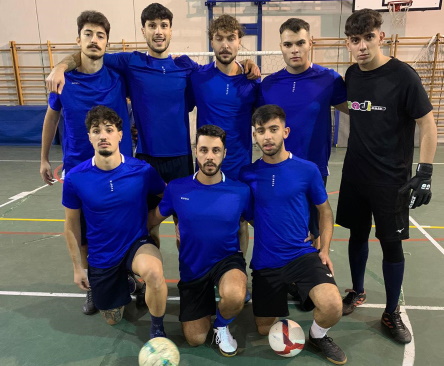 The preliminary stage of the inaugural tournament has reached the fourth round. In the Group A Basilico Pizzeria’s path to qualifying for Serie A continued without obstacles, 11-2 at the Justosspirito stadium, with a hat-trick from Mantovani and Odino and a brace from Piersanetti. A two-sided match between Real di Mezzo and O’Teamaggir: a hat-trick from Rodriguez, a goal from Caligari and Real de Mezzo goes into the first half with a score of 4-0, in the second half the sensational O’Teamaggir grabs 4-4, a hat-trick of Valentino and Reitano. O’Teamaggir forces the first stop on Real di Mezzo who have always been winning so far. Goleada from Scugnizzi from Bolzano, 17-3 against Atletico XI, with 6 goals from Capitoli, 4 from Solarino and a hat-trick from Pecoraro. After a balanced first half, which ended with a score of 2-2, AM Circolo Encap won 9-3 against the Ace of Hearts, a hat-trick from Morselli, bows from Russo and Artioli and a stamp from Fiorini.

In the Group B Super Polastri makes Bar Mattino Ostellato lead 3-0, however, Barraca de Guindalo makes 7 in a row in the second half and closes at 9-4, hat-tricks from Barbari and De Marchi. The Carlton Hotel fell 1-3 against the Asacro team, then turned the tables and won 7-5, as Venturoli, Armanio, Ferrari, Buarini and Dental scored. It ended 1-1 between Hurly Burly and New Team, and Schwoch responded to Pedarzini’s fireball early in the second half with a left-footed slash. On points, the new team deserved to win the full amount: hitting 2 crossbars and double saves on the line over Carravieri and Cardi. Salvatonica continues to surprise who, unlike the more popular Francolino, after taking the lead through Cavici, suffers a Bertoncelli draw and goes 1-4 down with goals from Serafini, Gerini and Crivelari, but comes back to score 4 unexpected goals. -4, two goals from Levons and a goal from 3-4 by Biondi.

In the Group C Super surprise, the Magik Pizza Steam Roller is stopped by Siever. Magic Pizza, which went up 3-1 with Alushi, Copsey and Henko, but Siver equalized before the break and then went ahead 4-3, 5-4, 6-5. The match ends 6-6 with two final goals by striker Ivanchuk. For Belotti’s hat-trick, Beltrami’s double and Orsi’s provisional goal 5-4. Magik Pizza rose to 10, Siever’s first point. In second place with 9 points falls The Kaleifi group that makes the big match against Aqua and Salyut their own. It was precisely Aqua and Salyut who participated 3 times, with 3 assists from Achaab, for Farinella, Tassi and Negri, but Maestri kept Kalevi afloat with a hat-trick in the first half, and in the second half again Maestri and then Bossi set the score in the final 5-3. sKoi Sushi comes out and takes one bite from Parrucchiera Nerty, 7-3, brackets from Filippo, Giacomo Rossi and Guidetti and a goal from Baraldi. The goal celebration between Otovicina Lodi and Tabache Levigatura Marmi: It ended with a 13-9 victory for Lodi and the second in a row Balboni scored 6, braces from Lodi, Delos Rios and Bentivoglio. Brackets by Rachita and Ilnytskyy and Pirani for Tlm.

In the one round On the fourth day, the arrangement is compressed at the top and divided into two parts. Virtus wins the big game against Xira, and leads the individual standings with 10 points. An excellent start to the match for Virtus, which clinched 3-0 with goals from Franchini, Diente and Capasa, Exera fell short with Bonazza with a penalty and Panzita before the break. Cassoni equalized at the start of the second half, but Virtus took the lead again: 4-3 from Capassa, equalized by Rubini, 5-4 from Franchini, touched by Piervillieri and then 7-5 with a double Benelli. Exera stamps with G. Casoni, but finishes 7-6. Exera is still at 9 points and reached: by Macaco, final 16-5 in Rapid Minatant, Poker by new signing Fornaio and hat-trick by Baroni, Nigrisoli, Finotti and Tugnoli, by Osteria Strabassotti who wins power in Hangar Birrerie, 8- 3 with bows from Voltani, Zeneli and Corazza and goals from Rosini and Braghini, from Restaurant Sidun, 7-4 in Spartak, poker from Morina, two goals from Cioffi and one from Caputo. Servizi Auto Catozzi beat Sporting Malbo, 5-3, matched by Basile and the returning Crocco and a goal from Palma’s arc. It ends with a draw between Asini Bradi and Panificio Porta Romana who go hand in hand with 4 points: Asini Bradi always leads, 1-0 and 2-1 thanks to a Biondi brace, Bellotti 3-1 in the second half and after. Bakery was tied at 3-3, Bellotti again at 4-3. Bennini scored for the bakery in the first half, then Manzini and Orsi, Ghaly scored the final goal 4-4.