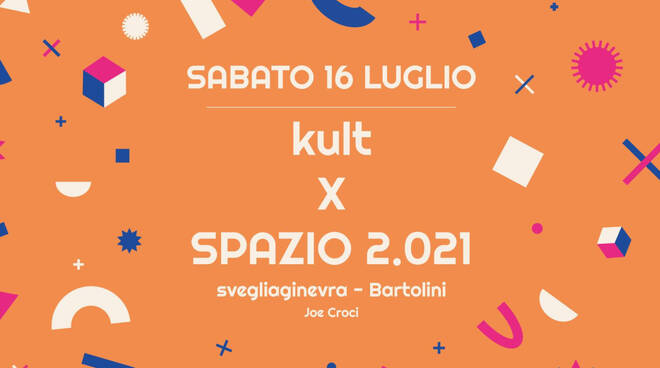 On Saturday 16 July, from 7 pm, Kult’s first event, the new Piacenza association dedicated to social and cultural promotion, will begin. The evening, held at and in association with Spazio 2.021, includes live music, djset, foodtruck and much more.

The lineup consists of three emerging artists from the Italian indie scene. We start with Joe Croese, born in London in 1999. Since he was a kid he had a great passion for music born during long car trips. Inspired by his favorite artists, he became interested in guitar and at the age of fifteen he started writing his first songs, taking his music to clubs or to the street. In 2021, he began publishing his first self-produced single. Bartolini, born in 1995, released his first EP -BRT Vol.1- in 2019, with a mix of sounds between Britpop, New Wave Outsider, and Italian pop singer. After a summer tour and the opening of two summer dates for the Evergreen Tour 2019 in Kolkata, he released the single “Te in particular” which paved the way for Penisola’s first official album. An album that fights the passage of time and tends to separate us, one from the other. An album is a love or friendship song.

And she finally woke up, who, after the success of her debut album and after establishing herself as one of the most beloved artists among the new generation of contemporary pop music, thanks to her ability to define the features of an entire generation, divided between love, anxiety and films in live broadcasts, returns live with the album The long-awaited second, Pensieri sparsi sulla tangenziale. For a Piacenza dinner, there will be a Bataroad food cart, which will also offer vegetarian options. The evening will end with a DJ set by Kult.

Doors open at 7 pm
Space 2.021 – via XXIV Maggio, 51
Free entry – however, it will be necessary to show the pairing card for those who do not have the card, fill out the form for this link. For information: [email protected]
Instagram: @kult.piacenza
Facebook: https://www.facebook.com/events/2212861795558751