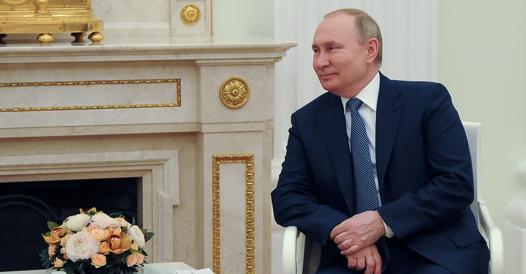 the Six meters long board That separated Vladimir Putin last week from French President Emmanuel Macron, who visited the Kremlin It gives the idea of ​​the isolation that the Russian leader experienced for nearly two years. Medical isolation is added to the isolation of all liberals, reformists and democrats who were close to him at the beginning of his presidency. Only a few people see the head of the Russian stateHe does not travel and increasingly around him are former comrades of the KGB, men from the armed forces who all seem to have the same opinions. Opinions certainly do not consider the West a model towards which Russia is directed.

On February 4, Putin exited Russia for the first time in 13 monthsGoing to China to meet leader Xi Jinping. Visitors from abroad are carefully screened for health safety reasons. It’s a miracle though In recent days, many European politicians have received who refused to undergo a swab against Covid by the Kremlin doctors, like Macron And German Chancellor Schulz.

All those who disappeared at the beginning of the first decade of the twenty-first century from the Kremlin’s radar They worked to steer the country towards a market economy and full democracy. Alexis Kudrin was appointed to head the all-important Ministry of Finance in addition to being Deputy Prime Minister. The economist comes from the ranks of Saint Petersburg liberals, who grew up under the reformist mayor Anatolij Sobchak whose deputy was Vladimir Putin himself when he left the KGB and quit the Communist Party. Kudrin fought to ensure that the state’s role in the economy did not increase. He was removed from the government in 2011 when Putin was prime minister, and ended up leading the SAI.

As head of the national energy system and then the nanotechnology project, Putin initially chose Anatolij Chubais, a young deputy prime minister who, with former President Boris Yeltsin, He led the major privatization of the Soviet economy. Now unimaginable, Chubais for years was at the same time at the head of Russian state-owned enterprises and a member of the supervisory board of one of the American banks, Jp Morgan Chase. Today he has a purely official role as the president’s representative to international organizations. Serge Kirienko, one of the young men whom Yeltsin looked up to and who was head of the government, is now the deputy head of the presidential administration. Even ex-Prime Minister Mikhail Kasyanov, appointed by Putin himself in 2000, ended up in the opposition.

On the other hand, there are more and more people who have a completely different idea of ​​relations with the rest of the world and the role of Russia. A beleaguered country, with enemies everywhere who seem to think only of the best way to eliminate them.

Sergei Naryshkin, powerful head of the Svr . Foreign Intelligence ServiceLike Putin, he comes from Leningrad then and from the KGB school. He often meets the head of the Kremlin and his opinions leave no room for doubt. Speaking about the situation in which Russian speakers live in Ukraine today, he claimed a few days ago that he has a basement The impression “that the time machine transports us to the most terrible years of Hitler’s occupation.”. As for his country, Naryshkin is convinced that attempts to destroy it never end: “As long as Russia remains immune from any external aggression, the topic of destabilizing the situation from within will never lose its relevance to our opponents.”

READ  Critical Race Theory. What is the republican weapon to restore the United States?

Listen to Vladimir Vladimirovich Nikolai Patrushev, former head of the Federal Security Service, the main successor to the KGB, and now the Secretary of the Security Council. He also comes from Leningrad and graduated from the KGB High School. He is convinced that the United States “would prefer that Russia not even exist as a state.” As for NATO, this is nothing more than the modern version of the medieval system of dependency. “Western phobia of Russia has a long history,” he says. It already existed in the time of Ivan the Terrible: “Anti-Russian practices are always the same, both today and hundreds of years ago.”

At the head of the Ministry of Defense Serge Shoigu, a Siberian Army general who is not from the KGB but has very similar ideas to those of his colleagues. The opening of NATO to the countries that were part of the Soviet Union and thus The Alliance’s approach to Russia’s borders reminds him of Nazi advances. In a statement to the Minister of Defense of the Federal Republic, three months ago, he replied angrily: “You should know very well how something like this ended for Germany and Europe.”

The current head of the FSB also comes from Leningrad and the KGBAlexander Bortnikov, who says he is convinced that “the destruction of Russia remains a fixed idea for some”. Putin confronts these collaborators most of the time before making any decisionsWhether we are talking about domestic politics, foreign policy or economics. And it must be admitted that Vladimir Vladimirovich is definitely a dove towards them.

Ukraine Direct War – Putin: “The accession of Finland and Sweden to NATO is not a threat.” Borrell: “Oil embargo? No guarantee”

“Ukraine, your song won our hearts”

How to Get the Most Profit from UK Online Casinos

What Sportsbooks Sites Can You Bet On In Canada

Bob’s Burgers, the movie is about to hit theaters: the trailer is irreverent