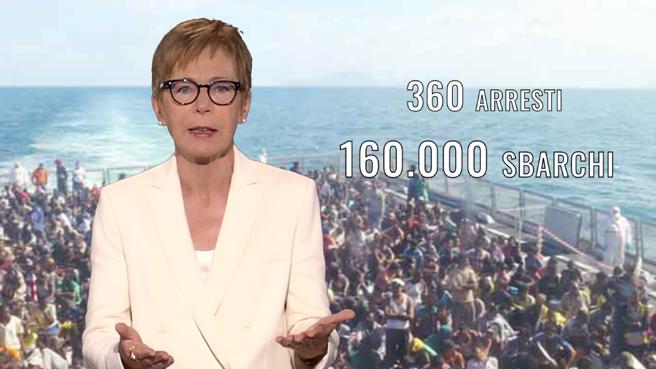 The revolving doors of Europe

The pressure of migrants on the Italian coasts began in 2011, the year in which the total disembarkations will be 64,261 compared to 4,450 in 2010. The bulk of departures are from Libya due to the instability of the post-Gaddafi era and from where thousands are trying to cross into Europe via Italy. Along with the numbers, deaths at sea are also rising. On October 3, 2013, there was a tragic drowning in Isola dei Conigli: 366 drowned. Out of global outrage, On October 18, 2013, the government of Enrico Letta launched Operation Mare Nostrum, costing 9.5 million a month and all at our expense (there is only Slovenia subsidized). Two goals: to patrol with naval vessels near the Libyan coast, to rescue and fight smugglers. In one year 366 smugglers were caught and 166,682 landings (Here is the document). But they don’t weigh much: reception centers are emptying fast as most migrants leave for northern Europe.

In 2014 the story changed: Europe accused Italy of violating the Dublin Regulation And allowing unidentified immigrants to cross through European countries. On September 25, the Ministry of the Interior was forced to issue a circular: “Aliens must always be subject to the results of the reports” (Here is the document). Measurements must be sent within 72 hours to the central Eurodac system, the European fingerprint database of those crossing European borders illegally. From that moment on, the revolving doors get complicated. Mare Nostrum ended, and in May 2015, Operation Sophia began which does the same things as Mare Nostrum, but with European army and police forces under Italian command. In two years (2015-2016), there were 335,278 landings, and at the end of 2016 the situation was out of control. Even the centre-left mayors rebelled: “We no longer know where to put immigrants.” In December of the same year. Gentiloni’s government appoints Marco Minniti as Minister of the Interior. He knows Libya well and the task is to remove the chestnuts from the fire. And in Libya Minniti goes.

15 months with Minniti in the Ministry of the Interior

On February 2, 2017, the Italian-Libyan memorandum was signedAn agreement between the Italian government and the Libyan Coast Guard to stop those departing by sea. In July, also in 2017, agreements were signed with the mayors of the Fezzan to close the migration route that enters Libya (Here is the document) from Algeria, Niger and Chad, which in return provides economic support for the development of local communities. The project is also funded by the European Union, as well as the voluntary repatriation (run by the UN agency Iom) from Libyan detention centers to their countries of origin with budget in their pockets to start a new life. From 2017 to today, there have been about 48,000 repatriations. After agreement with the United Nations High Commissioner for Refugees (UNhcr)Here is the document) for emergency evacuations at Italian state expense with destination Rome. From the end of 2017 to 2019, 913 persons entitled to protection and vulnerable persons were transferred from detention centers to Rome on humanitarian flights. A few, but in Libya gangs of extortionists rule, and we have to deal with them. Transfers will resume in 2021 with the participation of the Ministry of the Interior, the Community of Sant’Egidio and the Evangelical Churches. Save 500 people from the horror of prisons. The truth is that between May 2017 and May 2018 the drop decreased to 72,571 and continued to fall until August 2019 to 28,505. Meanwhile, the government has changed and Matteo Salvini has arrived in Minniti’s place.

The agreement with the Libyan coast guard drew worldwide condemnationDeportation is prohibited, but many migrants are taken to unofficial centers where they are forced into forced labour, tortured, and women raped. It happened with Gaddafi, and it happened later. This agreement expired in 2020, but the Italian government (Pd, M5S), after severe criticism, renewed it. Just as the Meloni government did again on November 3While the situation in Libya is worse than before. Everyone considers it a scandalous convention, but then no one cancels it. Libya is one of the few countries in the world that has not signed the Geneva Convention of 1951, which requires respect for human rights. After the dictator Gaddafi was bombed in 2011 under the NATO flag and executed in 2015, the only legitimate government recognized by the United Nations is the Al-Sarraj government. At this point, the United Nations could ask the Libyan prime minister to sign the Geneva Convention, but he does not do so, and the European Union and not a single member state ask for this. So much so that the United Nations High Commissioner for Refugees (UNHCR) protects refugees in Libya from its office in Tunis. A base was opened in Tripoli in 2017, when Minniti obtained from Sarraj security guarantees for humanitarian workers who have to enter detention centers and select the most vulnerable to evacuate them through the humanitarian corridor.

Meanwhile in the European Union with two decisions of the Council1523 in July 2015 and 1601 in September of the same year, A system of resettlement in favor of Italy is envisaged for 39,600 immigrants. Which is generally defined as mandatory resettlement: this means that Europe agrees to share our asylum seekers, who between 26 September 2015 and 26 September 2017 numbered 36,345. In the end, 12,740 will be taken (Germany, for example, receives 5,453 France 641). In September 2017, the judgment of the European Court of Justice also arrived, which, by rejecting the appeal of Hungary and Slovakia against deportation from Italy, strongly reaffirms The principle of solidarity distribution of refugees. principle Not acceptablebut, by the Chancelleries of Budapest, Warsaw and Prague (the Visegrad States), which oppose it. Once the agreement ends, at the first meeting of the board, Conte and Salvini do not insist on this as we move towards voluntary redistribution Which, in the end, is embodied in the Luxembourg Agreement of June 2022, which was so desired by the Minister of the Interior, Luciana Lamorgese. The agreement provides for the resettlement of about 10,000 asylum seekers annually. As of mid-November 2022, only 117 have been transferred.

READ  From its origins to Downing Street- Corriere.it

In 2018, Salvini withdrew the Sophia mission from Libyan waters to deal only with national borders andAnd from there onwards, The process goes towards disassembly (March 2020). Meanwhile, chaos erupts in Libya, Italian political influence disappears, Turkish influence reaches Tripoli, and Russian influence reaches Cyrenaica. Departures have resumed since 2021 and this year, out of 94,341 landings (as of November 24), more than half of the migrants have arrived from Libya, of which more than 30,000 are from Tripolitania and, for the first time, more than 17,000 are from Cyrenaica. And big boats leave from there. In the same period last year, the number of departures from the two Libyan regions was 24,697 and 2,276, respectively. It cannot be ruled out that there is pressure from Russia in Cyrenaica. But from which countries do the migrants leaving Libya come? Most of them are from Egypt (17,678), Bangladesh (13,794), and Syria (5,863), followed by Eritrea and Pakistan. If we also include arrivals from Turkey, Tunisia and other countries, there have been more than 100,000 disembarkations on the Italian coasts in the last 12 months. The receiver system can’t handle more than 70,000. We’re back to square one.

What do we ask of Europe: regular flows

All the propaganda about closed ports, which is impossible to implement, exploded again in our hands. Ten years later, we should have understood that immigration is not an emergency, but a structural fact that must be governed because there will always be. Because of wars, climate change and the search for better living conditions. We need to teach how to live with immigrants, which we need too. There is no point in insisting on a partition based on European solidarity, which will not exist. According to the latest available data, Spain has to deal with more than 100,000 irregular migrants, France with nearly 500,000, Germany with 1.2 million, while Hungary and Poland manage a few million Ukrainian refugees. while you continue Arguing about where migrants should land with NGOs only lengthens the list of hypocrisy: in 2022, they fluctuate around 10% of the total. What is realistic We can and should expect from Europe Instead, do two things: 1) Building a civil reception and integration system; 2) Agreements with countries on the brink of the abyss to start regular flows. Tunisia and Egypt are negotiating a loan with the International Monetary Fund because they need political and social stability. A loan granted on the condition of reducing subsidies for primary commodities. It is inevitable that young men, in the face of hopelessness, will attempt a better fate by risking the crossing. We remember that almost all landings are for males between the ages of 14 and 30. For this with Tunisia, Egypt, Niger and Bangladesh It is necessary to build an agreement: to give 20,000 legal entry through the consulate, but with the immediate return of those who have exceeded. Thus human trafficking and its consequences are crushed: dead at sea, thousands of illegal immigrants for crime or at best for unauthorized work.

READ  All the hawks of the Russian president - Corriere.it