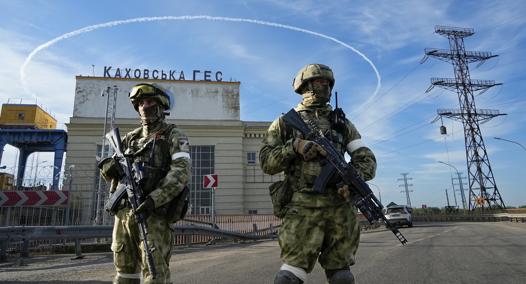 The great Russian writer: «Western countries are trying to pacify the war in Ukraine, but they do it at their own peril. Putin’s heir will only want to win the war against the world.”

“On the front page of the war. On the last page, a crossword puzzle.” A passage from my novel “Light and Darkness” comes to mind as I travel by train a few days after the Russian invasion of Ukraine.

In front of me, a passenger was reading the newspaper: on the first page was the war, on the last page, the crossword puzzle. Several months have passed since then, and the daily horrors are beginning to disappear from the headlines, despite the intensification of armed clashes in all their brutality..

In the West, no one wants to hear about war anymorePeople are tired of massacres and solidarity.
People demand peace, price stability and a peaceful life And the opportunity to enjoy the holidays.

This is not the first time my articles have raised the alarm about upcoming atrocities. before joining Crimea, she drew on a Russian folk tale, Teremok, to describe the unknown future of Europe. Once upon a time there was a quiet little house in the woods – A termok Where many wild animals live together. One day a frog knocked on the door. “Knock knock! Who lives in this teremok? Let me in, I would like to live with you too.” The animals let the frog in, and they congratulated everyone on the quiet and happy life in their little house. After some time, they opened the door to Keward, the hare, and Raynard, the fox , so there was room for everyone in the teremok. But then came the bear Bruin, who, no matter how hard he tried, could not sit in the teremok. At a certain point, the bear was on a rampage, with his weight, and crushed the house. And that was the end of the teremok and the fairy tale .

Warnings issued in the recent past did not raise any concern. In 2014, immediately after the annexation of Crimea, she wrote with growing concern that “in the 21st century, local wars no longer exist, far from us. Every war today is a European war. And this European war has already begun ».

I had expected that the annexation of Crimea by Russian President Vladimir PutinIt would have unleashed a ‘wave of patriotism’. Sooner or later this wave is destined to break, at which point Putin will have to resort to another trick.” I wrote at the time how chronic instability in the Balkans, which has persisted over the years, would have resulted in massive migration flows towards European countries, followed by a “larger wave of refugees from Ukraine.”

At that time, there was still time to stop the attacker. But European politicians have preferred to close their eyes to reality to win over voters. Voters also wanted peace in those days: jobs, no increase in the cost of living, and guaranteed vacations. Russia’s most experienced and corrupt analysts insisted that the West should understand Putin’s position and make concessions.

Today we come up with this: We find ourselves in the midst of a European war, dealing with an unprecedented wave of refugees fleeing Ukraine, and wondering why our politicians were so blind. No one listens to the voices of writers anymore. The only real lesson we can draw from history is unfortunately that history never teaches anything.

In Germany, thousands of intelligentsia signed a petition demanding that the government stop sending weapons to Ukraine, because there was a danger of a third world war. They declared, “We want a policy of peace, not war.” But World War III had already begun in 2014. How can you cure blindness if you insist on not seeing?

Today we ask ourselves: How and when will this war end? The war against Nazi Germany did not end with Hitler’s death, but rather in a crushing military defeat. Sooner or later, Putin’s death will be inevitable, not Russia’s defeat.

The answer depends on the originality. Some Caesars are true, others are false. If Holy Russia expands its territory and the peoples bow before the Moscow tyrant, then the enslaved subjects, who sweat, toil and shed their blood heroically for the Holy Motherland, are convinced that their fate is a blessing from heaven. There is no point in making distinctions about how the tsar came to power or how his subjects were governed. He can safely send them to slaughter by the millions, tear down thousands of churches and shoot their priests: what matters is that the Caesar is a real Caesar.And the
For only in this way will the enemy collapse in terror, and the Holy Land of Russia will expand. So it was with Stalin.

On the other hand, military defeats and the loss of even the smallest handkerchief in the Holy Land would be seen by the subjects of the Tsar as a clear indication of the lack of divine grace: the Tsar is illegitimate, he is sinful. Did he not succeed in defeating the Japanese? Or to subjugate Chechnya? So, the man on the throne is a charlatan who wishes to portray himself as Caesar. So it was with Nicholas II and Boris Yeltsin.

Putin legitimized his presidency by retaking Crimea, but that legitimacy is eroding rapidly due to his inability to overthrow Ukraine. The next tsar, in turn, will have to justify his mandate by winning the final victory in the war he fought against the whole world.. And if, for Putin, the threat of tactical nuclear weapons fits within the logic of hybrid warfare, then for the next Putin, using them may be the indispensable tool for staying in power.

Even the next Putin will simply be an actor unable to find another role. because its role is determined by the entire internal structure of power, which does not care about the number of victims of the conflict in Ukraine, Russia or anywhere else; He doesn’t care about the resources that will be spent, the number of weapons that will be deployed, or the death rate of his army. What if the quality of life in Russia decreased? Patience, the regime never thought about the welfare of its citizens.

Whoever is part of this cog of power is not at all afraid of attacking the West. After all, what should he fear? If a missile explodes on the territory of a NATO member state, what are the consequences? New conversations, new announcements, new appeals for peace. The free world must finally realize that he is not fighting a mad dictator, but a system of power. Independent, aggressive and self-healing.

The ancient social structure of Russian autocratic rule has been preserved in the repository of history and passed down through the centuries. And here she is ready to shed her skin to re-emerge in a new guise: as the Khanate of the Golden Horde and the Tsardom of Moscow, the Romanov Empire and the communist Soviet Union led by Stalin, and most recently as Putin’s “dominant democracy”. Today, the Russian Federation is changing its form again. What will emerge from the undisturbed foundations of an indomitable military dictatorship? Perhaps a free constitutional democracy, which on its own initiative would ban nuclear weapons? But does that seem likely to you?

Even before World War II, people wanted peace, stability in prices, and quiet holidays. Until then, voters had hoped that the democratic governments of France and England would enter into peace negotiations with Hitler, and give up the war. We know very well how it went, and we remember the famous message of “I have nothing to offer you but sweat, toil, tears, and blood,” said Winston Churchill to his people in all his brutal and tragic sincerity.

Sooner or later we will hear similar promises resonate, and instead of beautiful holidays, European voters will have to prepare for great sacrifices, concessions and hardships, because This is the price we must pay if we want peace.