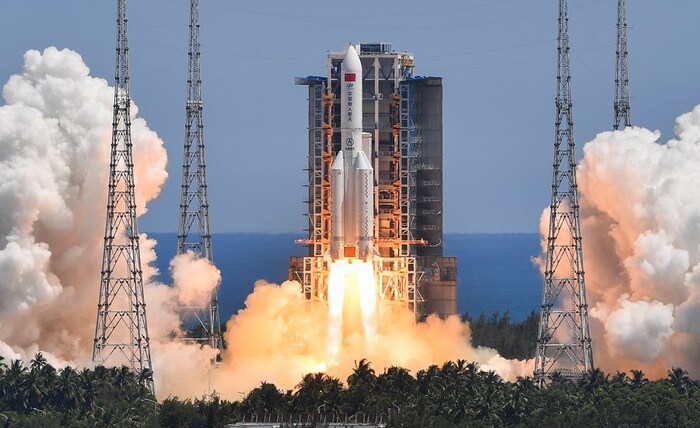 As happened in 2020 and 2021, one of the components of the Chinese Long March rocket this year also entered the stage of an uncontrolled fall to Earth. The impact expected on July 30 with uncertainty of 15 hours or less, is an item from the Chinese Long March 5B rocket, which on July 24 moved the second module of the Chinese space station Tiangong into orbit. According to the American Center for Orbital Studies and the Return of Space Debris (Ropes), the rocket component is likely to remain in flight for about a week. However, it is still too early to know where the space debris fell: the area affected by the fall of space debris is currently limited to the North Pacific Ocean, but it is impossible to obtain reliable data until a few hours before returning. It is also expected that the rocket component will not completely burn up in the atmosphere: “We expect a fragment weighing between 5 and 9 tons to reach the ground,” Cordes experts note. The main stages of most orbital-class rockets are designed to descend into the atmosphere shortly after takeoff, with a directed landing at sea or sparsely populated parts of land, or to land so that they can be reused, such as the SpaceX Falcon 9

“60-70% of the central stages of rockets launched into space are subject to uncontrolled reentry, but they are usually much smaller objects,” explains Ansa Luciano Anselmo, a researcher at the Institute of Information Science and Technology “Alessandro Faido” of Cnr (Isti- Cnr) and expert in spatial dynamics. “In this case, on the other hand, we’re talking about 25 tons – adds Anselmo – it’s the most massive object that can come back uncontrollably.”

The part of the rocket that will return to Earth, in fact, is the main stage, that is, the central cylinder equipped with two engines. Luciano Anselmo continues: “Normally this large pitch does not enter orbit, but falls back into the sea in a controlled manner immediately after launch.” “This type of mission, on the other hand, requires that the main stage also enter orbit, which poses the problem we are discussing, because there is no possibility to restart the engines to direct the missile’s fall. A problem that will be repeated – says the researcher – with the launch of the third unit needed to build a station Chinese space Tiangong”.

The Long March 5B component will return to Earth in an unsupervised manner, as has also happened in previous missions: after the first launch on May 5, 2020, the main field landed off the west coast of Africa, while in May 2021 in the Indian Ocean. “It is clear that China does not meet the accountability standards for space debris,” said Bill Nelson, Administrator of NASA. “It is imperative that China and all countries traveling in space, as well as commercial entities, act responsibly and transparently – adds Nelson – to ensure the long-term security, stability and sustainability of activities in space.”