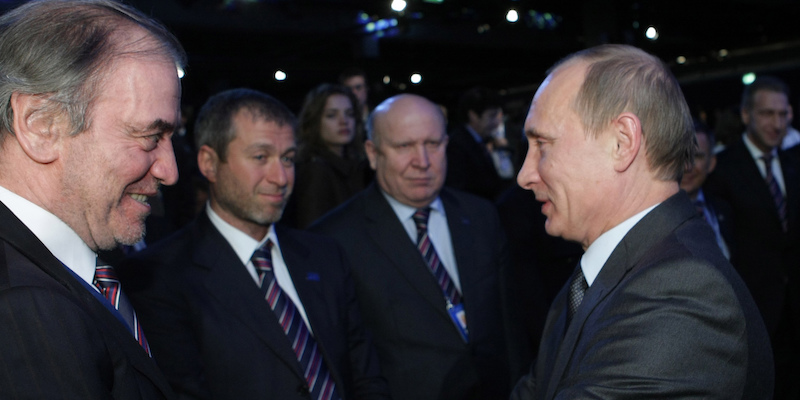 Russian President Vladimir Putin is often represented as a dictator or autocratic leader anyway, but in reality he shares a portion of power with the so-called Russian oligarchy, a small group of ordinary citizens who have accumulated massive fortunes over the years and who maintain close ties to the presidency affecting their political choices.

Since Russia’s invasion of Ukraine last Thursday, there has been a lot of talk about the oligarchy first and foremost because they have been among the hardest hit by Western sanctions, and secondly because some of the rebuilding, which must be taken with caution, appears to be creating among them. – Certain opposition to Putin and the war he started.

The term “oligarchy” is derived from Greek and refers to a system in which government is in the hands of a few people. It was a very prevalent form of government in ancient Greek cities, but until then it was despised by the philosophers Plato and Aristotle, since it was based on the wealth of individuals rather than on particular merits or gifts.

But after the age of Greek cities, oligarchy remained a form of government for centuries mostly theoretical, at least in the West, they studied simply from an academic point of view, until the end of the last century. In post-Soviet Russia specifically, the ideal context was created to assert the existence of a very wealthy elite that would later form the Russian oligarchy.

When the Soviet Union disintegrated in 1991, Russian President Boris Yeltsin accelerated the opening to Western capitalism that had been cautiously initiated by the last Soviet leader, Mikhail Gorbachev, but created severe imbalances. Yeltsin was funded by an early group of young businessmen. In exchange for their economic support, these men were able to take advantage of the political and economic situation, then in constant development: when the Russian government decided to privatize the huge Soviet public companies, some of these financiers were able to buy them at a low price. Pricing and reselling once dismembered.

After the dissolution of the Soviet system, in short, some men who started from money, They have become very wealthy In a short time, their business subsequently diversified from energy to sports through the metal sector and the media.

But in the past twenty years, the oligarchy has changed with the rise of Putin. At first, since the oligarchs had a very bad reputation in Russia for the ways in which they got rich, Putin openly sided against them. But then he did nothing to change the power relations, he replaced the old oligarchy with others, more trusting, and excluded those who opposed him from economic advantages. For example, many of Putin’s former colleagues joined the new oligarchy when he was a member of the KGB.

An interdependent relationship has been established between Putin and the new oligarchy – who are not officially part of the government or other public institutions, because, as former Russian Prime Minister Mikhail Kasyanov said in 2014 speak with the The New York Times“They depend on him, and he depends on them.” On the one hand, the oligarchy guarantees the stability and loyalty of Putin, and on the other hand, Putin allows them to expand their business and possessions.

It is a report admitted by Putin himself Interview date for financial times, where he said that the oligarchs are “those who use their proximity to the authorities for great profits”. After all, Putin, during his more than twenty years in power, also managed to get very rich.

Despite this interconnected relationship, it seems that the oligarchy is Anything but compact In support of Putin’s invasion of Ukraine. Indeed, the fortune of the oligarch, who all own the assets of billionaires, resides largely outside Russia, so they are likely to suffer serious consequences due to European and American sanctions. It is for this reason that they express a slant opposition to Putin.

For example, Oleg Deripaska, founder of one of the largest industrial groups in Russia, published a post on Telegram in which he hopes that a peace agreement will be reached “as soon as possible”. Then he issued a statement indirectly criticizing the economic management of the Putin government: “It is necessary to change economic policy, all this state capitalism must be put to an end.”

According to the news agency Reuters The other oligarch, Mikhail Friedman, will have wrote a letter To his subordinates, he described the war in Ukraine as “a crisis that will take many lives and harm two brotherly countries for hundreds of years.”

Some of the actions of the oligarch Roman Abramovich were also interpreted as signs of concern about war and Western sanctions. Abramovich announced over the weekend that he is leaving Chelsea Football Club management, but not ownership. In the statement there was no explicit reference to the situation in Ukraine, but According to an official spokesperson Abramovich is believed to have participated in Monday’s meeting between the Russian and Ukrainian delegations that took place on the Ukraine-Belarus border.

– Read also: The first results of the sanctions

READ  Six dead, the same method of work and details of uniting the victims