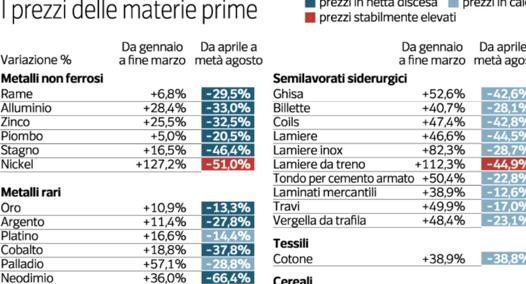 Not only corn and wheat. The decline in prices now also affects steel, zinc, scrap, aluminum … If the decrease in prices can be explained by agricultural raw materials With the green light for ships waiting to leave on the Black SeaAnother story with industrial raw materials. The Russian-Ukrainian war that raised prices is still going on. There are other reasons for this decline. Achille Fornasini, Professor of Technical Analysis of Financial Markets at Brescia, Examine the prices of the main industrial raw materials since the beginning of the year. As can be seen from the table, the vast majority recorded from April to today Big drop in prices. Sometimes enough to make up for increases that occurred in the first three months of the year.

What’s going on? For Fornasini, there are three reasons. First, companies built huge stocks out of fear that the war would further limit supplies, and now their warehouses are full. Second, the increasing strength of the dollar has increased the cost of purchasing raw materials, almost all priced in dollars. Third, the looming recession caused by the restrictive measures of central banks in Europe and the United States has caused financial speculation to flee from organized commodity markets.

The fact that cotton, iron ore and silicon are returning to pre-war prices may itself be good news for the industry but may not be enough to stabilize production costs as gas and energy continue to rise. The steel sector, which in recent months has been able to offload the increase in energy prices on the final product, is now facing difficulty due to lower prices for coils and sheets. Let’s take the case of Ilva, the last remaining blast furnace in Italy. This is fed by iron ores and coke which has driven down prices in recent months. But the problem is that the price of steel coils coming out of Taranto is also approaching the levels of the beginning of the year. While rising energy costs are showing no signs of declining. The same goes for steel mills with an electric furnace, although here the prices of the finished products hold up better because they are engaged in construction activities, and are still backed by various bonuses. Carlo Altomonti, Professor of European Economic Policy at Bocconi points out -. By raising interest rates, central banks slow the economy to eliminate the inflationary tendency. These are the first effects. This should lead us in 4-5 months to lower cart prices. The important thing is that the European Central Bank steps in with interest rates in the fall, given that the slowdown in the economy has already begun.

Finally, one last element: the cost of moving goods. To show the economy is slowing, there are also indicators that summarize the average dollar costs of shipping (see chart, editor’s note) – adds Fornasini element -. After setting the record in October 2021, the Baltic Dry Index collapsed in a few months (-75%) and is now at its lowest.