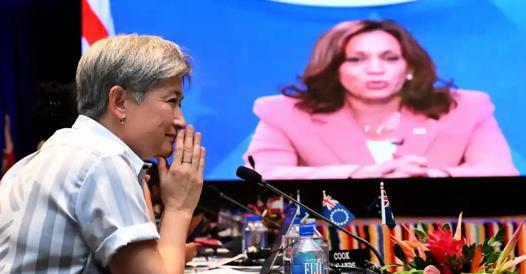 US Vice President Kamala Harris addresses the Pacific nations by warning them not to “seek to undermine the international order” and offering them $60 million a year for 10 years. Beijing watches – sends fake reporters into the press room

More modest, but no less strategic, his deputy Kamala Harris working on the tuna fishing front To strengthen relations with Pacific countries.

The Vice President of the United States addressed the Pacific Islands Forum, held in Fiji, calling on the 18 countries of the organization to beware of “bad actors trying to undermine the international order”: a clear reference to China’s geopolitical maneuvers in the ocean region.

Harris acknowledged that the United States has left a void in recent years: “You haven’t got the diplomatic attention and support you deserve.”He said in a video conference. “So I’m here today to tell you straight away that we’ve decided to change the line.”

To underscore this renewed interest, Washington reopens its embassies in Tonga and Kiribatiwhich was closed to save money (the Chinese, who spared no expense for their diplomacy, are present and active throughout the region).

The heart of the speech was a show 60 million dollars a year for ten years to aid fisheries, an important source of income for the countries of the region. Thus the US fund has been tripled and will be used to combat illegal fishing (in which the Chinese are heavily involved), enhance maritime security and tackle climate change. Fiji government comments: ‘Tuna politics was born’.

The Biden administration focuses a lot on fisheries policy: Last month it passed a national security memorandum on illegal or unregulated fishing, a billion-dollar annual sales figure that harms the ecosystem (and behind which China plays a leading role).

Beijing has the most powerful deep sea fishing fleetThe one who casts the nets and treats the fish in them Large floating factories off the coast of Asia, Africa and America.

China rejects allegations of illegal exploitationclaims to have signed regular agreements with the respective governments, but there is a huge gray area in the oceans where they have committed Real commercial piracy on an industrial basis. Moreover, many countries are also closing their eyes: Washington recognizes that more than one-tenth of the seafood products that reach the US market, worth $2.4 billion, are of illegal or uncertain origin.

It is sufficient to prevent this type of imports to deal a severe blow to the overfishing.

Even the “tuna policy”, with its $60 million aid to the countries of Oceania, does not ignore it. The United States wants to counter Chinese diplomatic action in the region, After receiving the blow of the security agreement between Beijing and Suleiman. Among the signals Washington sent was the return of the Peace Corps to Fiji, Tonga, Samoa and Vanuatu. The Peace Corps was formed by President Kennedy in 1961 to enhance America’s image in the world during the Cold War by sending experienced volunteers in cooperation.

Note: The waters of the summit shook with a kind of Chinese incursion. Beijing is not part of the Pacific Islands Forum, but it is a partner, like the United States. In the press room they introduced themselves Two Chinese journalists take notes seriously. But they weren’t reporters: He was recognized as the military attache of the Chinese Embassy in Fiji and his deputy. The two were accompanied by the director.

READ  Donald Trump mocks the war in Ukraine: 'Let's put the Chinese flag on the fighters and bomb Russia'