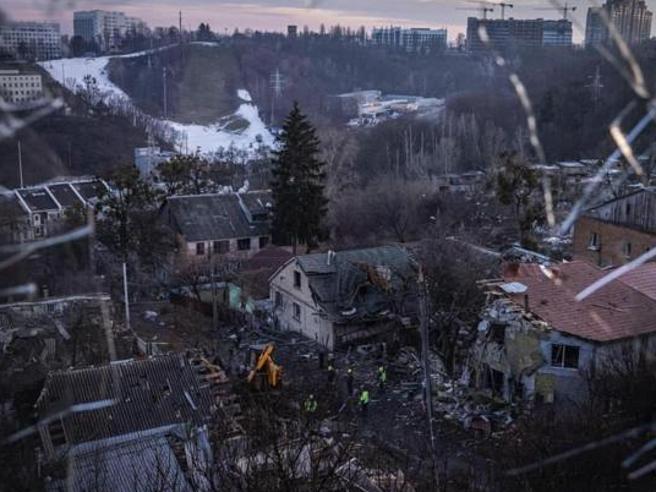 to Marta Serafini, posted to Kyiv, and Redizione Online

Harb Bulletin Friday, January 13, live. to solidar Complete the battle. Zelensky: We will do what is necessary to support the forces

• The war arrived in Ukraine on 324.
• In June the new meeting of the European Political Community in Moldova.
• The head of Wagner Solidar is in Russian hands, but the Ukrainians deny: We are advancing.
• Lavrov will visit Belarus on January 19th.
• Why demote Putin Sergey SurovkinGeneral Armageddon, who led operations in Ukraine.
• Shattered Ukraine: Satellite images show the destruction.

An air alert has gone off in four regions of Ukraine, the Kyiv authorities said. These are Kharkiv, Sumy, Poltava and Dnipropetrovsk regions where sirens sounded at 11 and 15 local time. Russian attacks on Ukraine’s energy infrastructure began on October 10.

Ukraine is now a de facto member of NATO and will soon receive weapons such as tanks and fighter jets that NATO has so far refused to provide for fear of escalation with Moscow. This was stated by the Minister of Defense of Ukraine, Olekskii Reznikov, in an interview with BBC. He added that these concerns about escalation are just a matter of etiquette for me.

Moscow plans to create an army of 2 million soldiers: according to the Defense Intelligence of Ukraine (GUR) based on the extent of mobilization underway in Russia. Kyiv intelligence reported that 300,000 people were recruited for the first conscription, Rbc-Ukraine reported. The GUR now does not rule out the possibility of Moscow announcing another mobilization in the coming days and believes that this time another 500,000 Russians will join the armed forces. The scale of these measures indicates Moscow’s plans to create an army of around 2 million people compared to the previous target of 1.5 million soldiers.

More than two hundred Ukrainian servicemen have arrived in Spain to take part in the training at the Torrejon de Ardoz Air Base. During the training, they will learn how to treat injured people in battle and how to use some specific devices on the battlefield.

09:40 – British intelligence, the Russians are using prisoners to produce weapons

The Russian Ministry of Defense resorts to the use of prison workers in an attempt to meet demands for war materials for use in the conflict. British Intelligence says this in its daily update on Twitter. The prisoners are used – as shown – to produce low-tech weapons. Uralvagonzavod (UVZ), Russia’s largest tank manufacturer, said last November it would take 250 prisoners.

09:18 – Defense Minister Kyiv, we are already a de facto member of NATO

Ukraine is a de facto, not a de jure, member of NATO. This was stated by the Minister of Defense of Ukraine Olekseyj Reznikov in an interview with the BBC. He added: We have weapons (from the coalition) and we know how to use them. Reznikov also said he was confident that Kyiv would receive the required weapons, including tanks and combat aircraft, in view of the possible spring offensive.

08:34 AM – Kyiv, we are resisting the high intensity Russian offensive at Solidar

Ukrainian Deputy Defense Minister Hanna Malyar said today that Ukrainian forces are resisting a very intense Russian offensive in Solidar. Malyar said via Telegram that the enemy has sent almost all of its main forces in the direction of the Donetsk region and is continuing a very intense offensive. He added that this is a difficult stage of the war, indicating that the fighting continues.

08:25 am – Solidar, images of devastation: Homes and schools in rubble, fields reduced to vast swaths of craters

(Marta Serafini) From our Odessa correspondent – It makes you shiver Maxar satellite imagery of the cities of Solidar and Bakhmut and other areas around the Donetsk region in eastern Ukraine. Comparing the same regions a few months apart, between August 2022 and January 2023, The battle rage is palpable.

Dug in fields and along roads, destroyed homes, schools and buildings. The head of the Donetsk regional administration, Pavlo Kirilenko, said that the Russians walked over the corpses of their soldiers, burning everything in their path. Russian forces use mortars and rockets to Solidar bombed in a relentless attack, fighting for a détente in an 11-month-old war. Civilians are trying to survive in this bloodbath, Kirilenko said, while the Russians press their attacks. Also according to the governor, there will be 523 trapped civilians, mostly elderly, whose evacuation is now unthinkable.

08:25 – Zelensky, whatever it takes to defend Solidar

Ukrainian President Volodymyr Zelensky pledged to provide all necessary supplies to the resisting soldiers On Russian aggressions a Solidar and Bakhmuttwo eastern cities that Russia is trying to occupy at any cost to change the course of the war. I want to confirm that the units defending these cities will be provided with ammunition and all the necessary supplies quickly and without interruption,” Zelensky said on Facebook yesterday, after meeting with his employees. The UN Security Council meets today at 20:00 to discuss the situation in Ukraine. The Deputy Minister of Defense, Jana Malyar, said that the situation in Solidar has been difficult for the Ukrainian army in recent days, and the fiercest and fiercest battles are still going on today.

READ  Children will go blind, a Canadian couple will take them around the world to fill their "visual memories" - Corriere.it