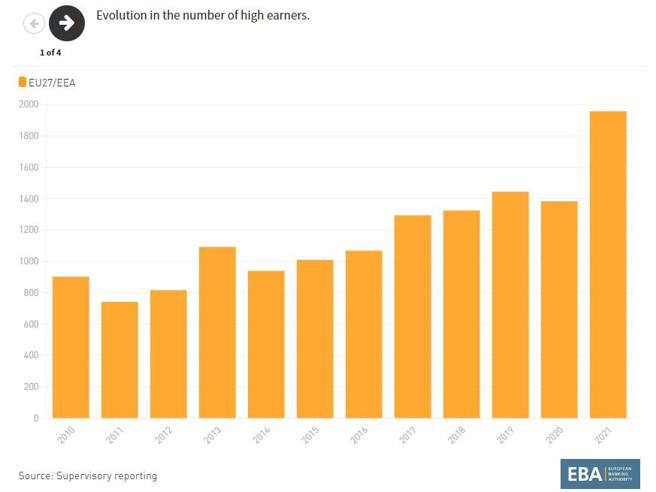 There are nearly 2,000 bankers in the eurozone earning more than €1 million: a new record, following the good performance of institutions, particularly in investment banking, trade and sales. The data, which refers to 2021, was collected by the European Banking Authority. In detail, the number of bankers with salaries over one million euros increased by 41.5% from 1,383 in 2020 to 1,957, the highest value since surveys began in 2010. Among the reasons for the boom, as the EBA explains in its report, there is also a re Distribution of staff to EU activities in the context of Brexit.

Italy is in third place in Europe

The increase in the number of millionaire bankers comes after 2020 which saw the European number drop from 1,444 to 1,383 as a result of the moral suasion exercised by both the EBA and the European Central Bank, which demanded that banks not go over bonuses and compensation in light of the great uncertainty it has created. Covid pandemic.

The ratio between variable and fixed wages increased on average, at the EU level, from 86.4% in 2020 to 100.6% in 2021. Since this is part of the salary linked to the performance of banks, the good financial performance of the institutions has led to an increase in some bonuses.