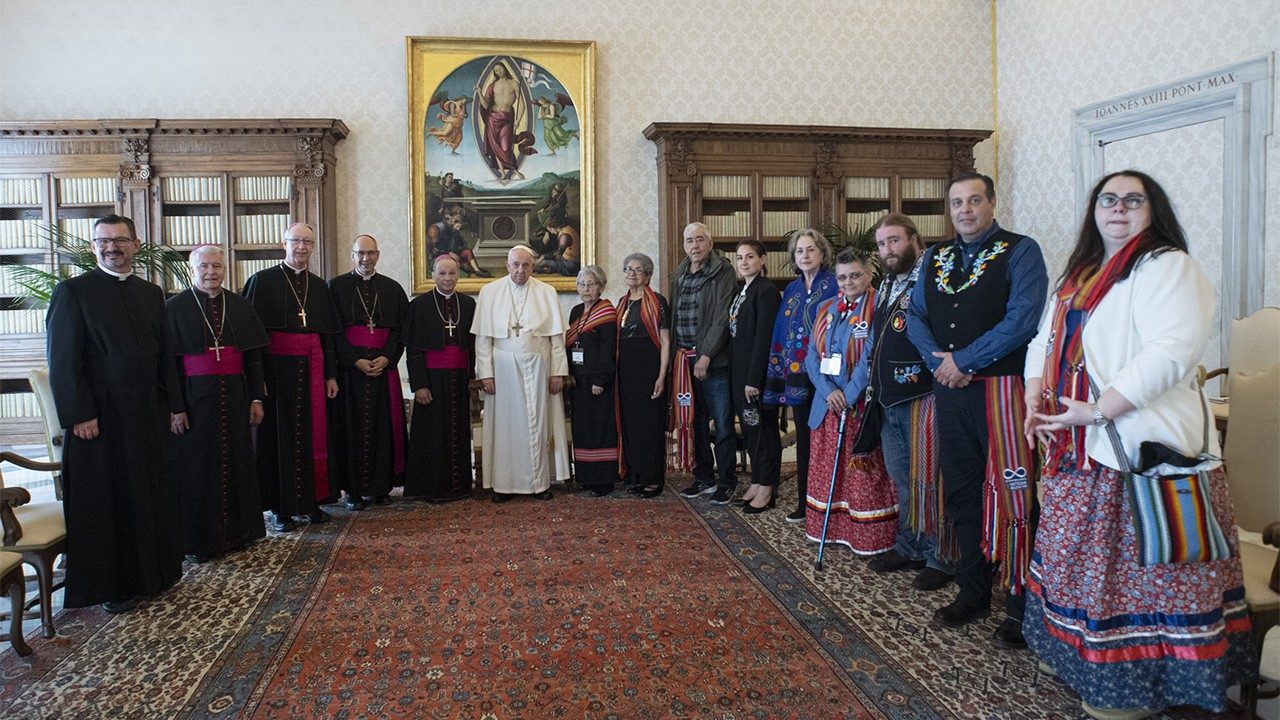 Two visitors, this morning, with representatives of the original Medes and Inuit people: the desire to hear the stories of survivors from the Pope. Members of the Medis Council in St. Peter’s Square: “Join Francis on the Journey to Truth, Justice and Reconciliation”

“Truth, Justice, Healing, Reconciliation”. They came to Rome from Canada with these ‘goods’ to present and share with the Pope that they could not erase the pain of the past, but take a common path to cure and prevent the future. . Representation of the Canadian Indigenous People was received this morning by Pope Francis during two consecutive visits to the Apostolic Library. They were accompanied by a delegation of Métis and Inuit, some bishops of the Bishops’ Conference of Canada, each staying with Francis for about an hour. Bruni says, “characterized by the Pope’s desire to hear and accommodate the painful stories that survivors bring.”

Pope’s visitors with representatives of the tribe from Canada

The path to reconciliation

It was during an angelic event on June 6, 2020, that a mass grave was discovered at the Kamloops Indian Residential School, a school in Canada, and the pope shared with the world the shock of the dramatic news that came a few weeks ago. More than 200 human remains of Indigenous Canadians. From the 1880s until the last decades of the twentieth century, a terrible invention aimed at educating and transforming the aborigines in institutions funded by the government and largely run by Christian organizations was a symbol of the oppression that had plagued the country. In traditional Canadian society, young people through systematic abuse and integrate them. Discovery in June (followed by others) The Canadian bishop created an immediate “me gulpa” and implemented a series of programs to support tribal communities, in a process of reconciliation, the culmination of which is now marked by the availability of the pope. Considering the future apostolic journey of receiving communities in the Vatican today and on March 31st – although confirmed, it has not been confirmed. On April 1 Francis will receive visitors at the Clementine Hall, various delegates and the Canadian Bishops’ Conference.

Members of the Medis National Council in San Pietro

“It’s never too late to do the right thing”

First, this morning, Francesco Medis received members of the National Council. An encounter stopped by words, stories, memories and many gestures: the pope and the tribesmen found themselves following in common path. “Truth, justice, healing, reconciliation”, really.

To the sound of two violins leaving the Apostolic Palace, as a sign of their culture and identity, the Indigenous people met with international journalists outside St. Peter’s Square and told them morning details. Casidi Karon, the young leader of Métis, has made himself a spokesperson – by reading one Report “Countless people have left us without listening to their truths and recognizing their pain. They have not received the humanity and basic treatment they deserve,” he said.

A “difficult but essential work” was initiated by the Métis Nation to hear and understand the victims and their families. Collections were presented to Francis today: “He was sitting and listening, and he nodded as our survivors told their stories. I felt pain in her reactions in the case of children. The survivors did an amazing job of telling their truths and they were very brave.

“We did a lot of work for our trip and meeting with the pope. We translated our words with words he could understand,” Caron continued. It is hoped that the pope and the Church of the World will now undertake the task of “translation”: that is, translating the words heard into “real acts of truth.” “When Pope Francis was invited to join us, he repeatedly replied in English, ‘Truth, justice, healing, reconciliation.’ We take it as a personal pledge.

READ  Canada-Uruguay 0-2, Oliveira was on the pitch for the full 90 minutes

The leader of Métis repeatedly repeated the word “pride”: “We are proud to be here with the Inuit and the First Nations. We are proud of our history and culture. We will continue to support the truth and all that is needed to understand it.

The group, which was in St. Peter’s Square, also included 85-year-old Angie Girar. Short hair, dark glasses, multicolored helmet over a black dress, she came in a wheelchair, but stood up as she shared snippets of the story. That’s what he told the pope. So, in 1947, he spent more than ten years with his little sisters at a boarding school in the Northwest, where “we lost everything, everything, everything except language.” “When we left, it took me over 45 years to regain what I lost.” Angie, however, says she does not want to be overwhelmed by memories of the past, but looks to the present: “Now we are strong. They have not broken us, we are still here. We waited a long time, but it looks like they will all be working with us now. For me it was a victory, a victory for our people in the lost years. ”

In today’s audience with Francis, the woman reveals that she came to the Vatican “very nervous” but saw “the sweetest, kindest person she has ever met.” The Pope offered her a hug, which wiped out decades of suffering: “I was standing next to him and they had to set me aside (Laughs) Was wonderful. I was very nervous, but after he spoke to me, even though I did not understand everything he was saying, his smile, his reactions, his body language, made me feel like this friend.

READ  "He presented his book at Cesena, and I remember his passion"