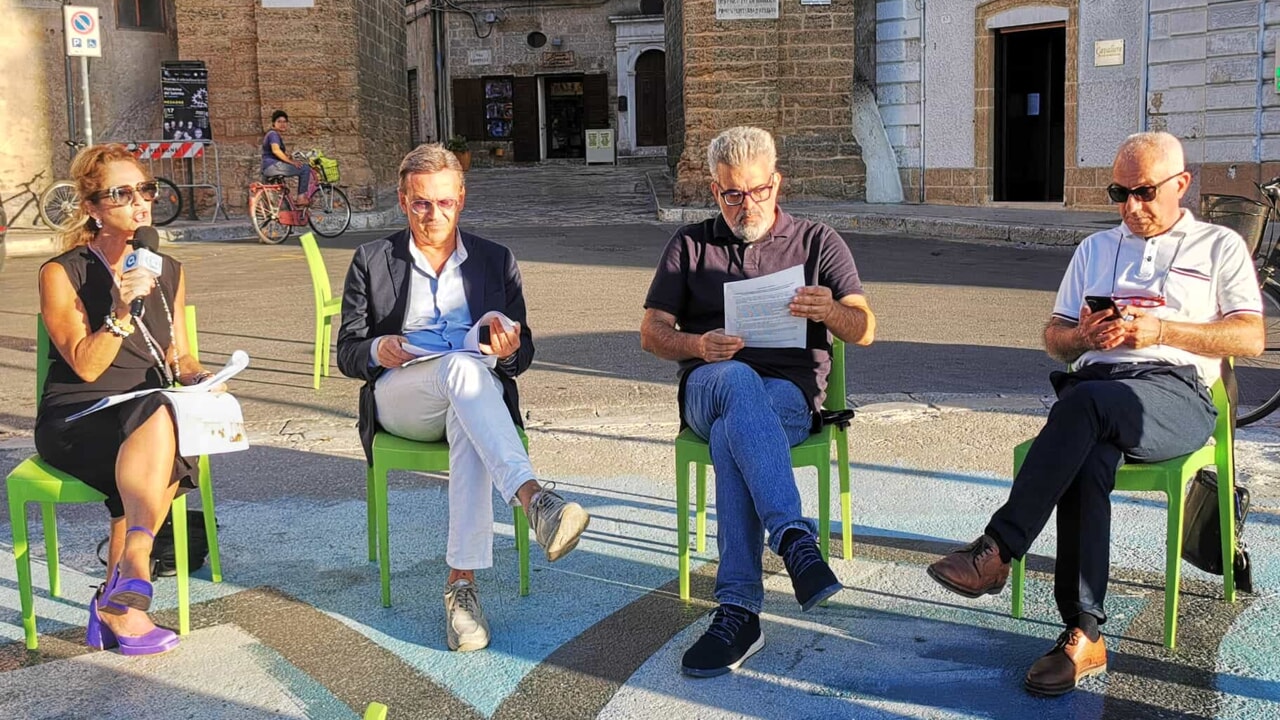 MESAGNE – The time has come to prepare each requirement for an application for potential funding for the redevelopment of Piazza Vittorio Emanuele II. In this spirit, the first step of the path whose last step has been an ambitious priority as necessary over the days has been completed: the promotion of one of the most important open spaces for public life in Missani. Which for more than a century also represented an unresolved aspect of the urban space design of the city. The design competition, launched by the municipal administration in February, led to the identification – by a technical committee – of the proposal considered to best align with the objectives outlined in the advertisement. The Mayor of Missani spoke at the meeting – which took place this late afternoon in Piazza Porta Grande, as Missani residents and visitors call the space named after the last Sardinian king who was the first king of Italy. Mattarelli. Deputy Mayor in charge of urban planning, Giuseppe Cimraro; Municipal technologists, engineers Rosa Bianca Morleo and Claudio Perrucci.

The mayor stressed the high historical and symbolic value of the square, an element that was also the starting point for the renewal that will be ensured through the involvement of social, economic and cultural actors in the city. “Piazza Porta Grande in the popular perception is a space associated with work and meeting among workers, but also a social place where productive function is linked to the absolute nature of self-finding,” the mayor explained, pointing to an image of a context that for decades was also emblematic of a thriving agricultural economy. There are two symbols that support the ideal redevelopment system for the region: action and legitimacy. First-rate attention is given to enhancing the so-called ‘soft navigation’ system, which is part of an overall vision that expresses a space that is ‘permeable’ – for perception and material quality – and bright and respectful of prehistory. Existing buildings.

“The restructuring includes a model of urban renewal that will affect the entire city: the proposed intervention takes into account an essential aspect, namely the relationship between the historic center, the monumental entrance door and the square itself, envisioning a balanced functional relationship between distinct but connected urban parts,” declared Vice Mayor, Giuseppe Simraro. “The integrated redevelopment intervention will follow simple but important principles, capable of defining a major change, which will lead to the formation of two integrated spaces, the garden and the meeting place, connected to each other by the continuity of the public pedestrian land” added Commissioner Roberto d’Ancona. “The novelty of the transformation we are aiming for lies in daily use, I would say diligent, for which we intend to allocate an important public space, which will be a green area in which to stop, a plaza to spend time to chat, read a newspaper or have a drink, to schedule a concert Or an evening event,” concluded Mayor Mattarelli.