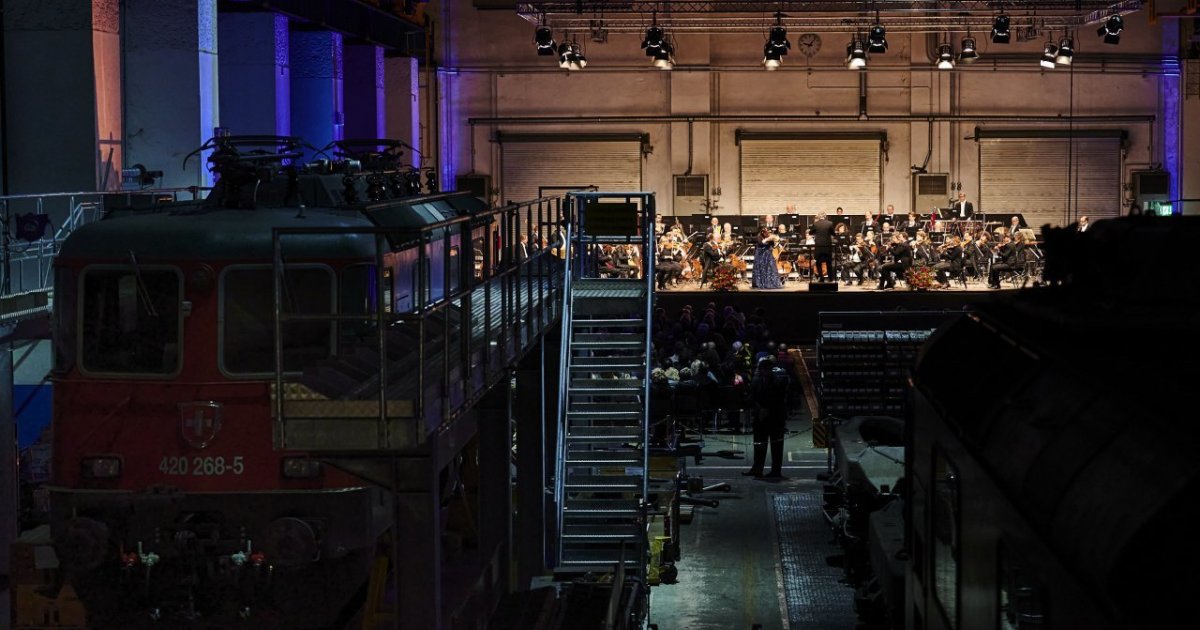 Bellinzona acquired an excellent New Workshop District development project last year, which is due to be completed in fifty years, as there will likely be no trains traveling on the rails and no driver behind the wheel. In it is the ‘Cathedral’, the large industrial building declared a protected monument, which was used last Saturday as a concert hall and hosted the Swiss-Italian Philharmonic Orchestra led by Marcus Buchner with violinist Pepa Skred.

It was a very successful event, first of all for the high quality of the musical performances, but also for the commitment to deal with a completely new logistical situation, with the enthusiasm and kindness of the staff of the truly commendable organization.

On a flower-adorned stage, sixty dressed orchestras easily found their place, beneath them, on chairs and benches, perhaps five hundred listeners. The “cathedral”, emptied and converted into an auditorium, could accommodate at least two thousand spectators, but in the meantime it is unimaginable: the architectural characteristics of the concert halls that are now being planned are completely different.

The programme, which was repeated the following evening at the Teatro Nouveau in Udine, opened with a little-known symphonic movement ‘Blumine’ by Gustav Mahler, which bears the date of 1888 with a revision in 1893. It is elegiac music, which can be set in the perfect romantic afternoon. , which eventually falls into silence and ends with three notes cut on the strings of the ukulele. In the hall’s programme, musicologist Giovanni Gavazzini suggested that Buchner may have chosen it to remember how much Mahler appreciated Tchaikovsky’s opening of the symphony with autobiographical signs.

Eric Wolfgang Korngold’s Concerto for Violin and Orchestra was completed in 1946 and it would be suspected that great violinists, beginning with Joshua Heifetz who oversaw the premiere, did not have them in their repertoire. So a tribute to Peppa Skreide, the conductor and orchestra who supported her in an outstanding performance. The sound of a violin is always different from that of an orchestra, ease in technically challenging sections as opposed to graceful orchestras, and attention to detail. Not a fight, according to the Latin etymology “certamen”, but a modern search for relationships, for mutual stimuli, in short, a concert rescued from the repercussions of the nineteenth century.

The grand finale with Piotr Il’ič Tchaikovsky’s Fifth Symphony, which was already given at a concert at LAC a month ago. Although the acoustics in Officine are somewhat redundant than in the Sala Teatro of the LAC, or perhaps precisely for this reason, Bellinzona’s performance seemed to me better, at least more exciting.

Saying that Poschner searches for the original scores, cleaning them of deposits that have formed over time and which may also have distorted the composer’s idea and intentions, seems obvious to me, every serious conductor does. Everything is better if afterwards he finds out that the first performances took place with a small number of strings, as in the case of an orchestra. But be careful saying that they are looking for historical explanations, they may at least be misleading. The composer on the staff cannot write everything, it is up to the free choice of the translator to add what is missing. Each performance of the same work must be something completely new, and it catches up if it is trying to be a photocopy of a previous work. Transcripts are the recordings we listen to ad libitum, while listening to a concert in the audience can only be unicum.

READ  Àgalma by Chiara H. Savoia at Ferioli Art Space: a portrait of a desire that never goes out

The essence of interpretation is the occupation, or rather the construction of the surrounding sound space, which is a physical process, but also a psychological one if the conductor, in addition to the orchestra, knows how to engage the audience in his deafening silence . I think with affection of the sound spaces that, a month later, Marcus Buchner and the Swiss Italian Orchestra built the Sala Teatro at LAC and in the Officine “cathedral”.