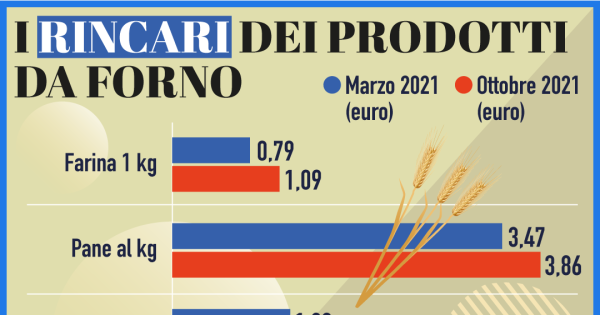 Rome – The commodity crisis drove up the retail price of bread, with increases that have been recorded in recent days across the peninsula and prices that have gone up in some cities. . has been reported Kodakun, which prepares reports Increases in the retail price lists of loaves and similar products will cost Italian families a total of an additional 690 million euros on an annual basis. “Bread is one of the foods that should not be missed on Italian tables, so much so that the average per capita consumption in our country is about 41 kg per year – explains the president Carlo Renzi – The record prices of wheat have direct implications for the retail price lists of this product, as prices in recent days have recorded average increases of + 10% in the region. Analyzing Istat data on the average monthly spending of Italians on this food, price increases in price lists will lead, with the same consumption, to an increase in spending equal to an average of +26.5 euros per year for each household only buying bread. ”

Flights, energy and fuel to the stars

Furthermore itNational Consumers Association Detailed Istat data for file setup The ranking of the products that recorded the largest increases. Not only to rise in October Flights, electricity, gas and petrol as well as oil, pasta, meat and toys. In the top ten non-food products, International flights that win an astronomical +38.8% compared to October 2020 (domestic flights + 19.9%). In second place is gas, +33.3% on an annual basis, in third place is LPG and methane for cars, with a jump of 33%, diesel is in fourth place: +23.5% for transportation and +22.3% for heating. In fifth place was gasoline + 22.1%. Followed by fixed telephones and faxes +21.4%, electricity in seventh place +17.7%, coffee machines (+15.5%) and cameras and camcorders (+15.3%). Heating and air conditioning equipment closed in tenth place with a rate of +13.3%. Despite coming out of the top ten, in anticipation of Christmas, the rise in gaming prices (both traditional and electronic) is worrying, which already recorded in October +5.7% y/y but up to +2.4% in September which discounted supply problems from China. In the top ten of food products, oils other than olive oils, which increased by 17.7% from last year.

According to the estimates of the National Observatory FederConsumatoryAnd Just looking at the increases in energy, fuel and bread, citizens face increases of +551.84 euros per year. “Our concern is that these are increases in critical sectors, which would put the most vulnerable in particular at great difficulty. That is why we called on the Antitrust Committee to check for speculative phenomena in both fuels and bread and pasta, to avoid restrictive agreements capable of making The harm to the citizens is more serious.” “At this delicate stage – Federconsumatori continues – It is urgent for the government to step in by putting tax reform on the agenda: on invoices, with a review and restatement of the notorious system fee; on fuel, with the revision of excise duties and the adoption of a mobile tax system, capable of reducing the excise tax while increasing the cost of raw materials; On consumer goods, with a decrease in prices