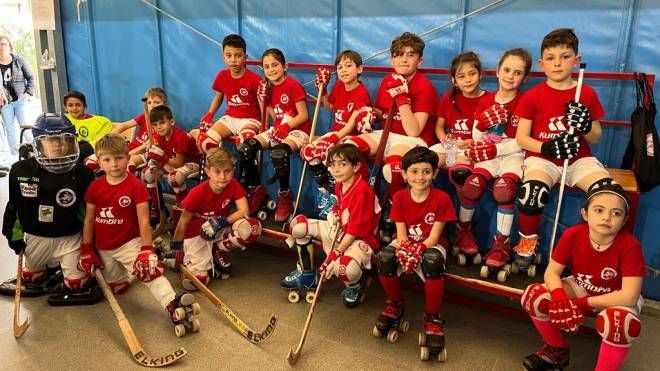 Children’s mini hockey of Grosseto Ski Club, and below are four girls who practice the sport. With coach Pablo Saavedra

The Sports Center on Via Mercurio hosted a small hockey concentration which was attended by Grosseto Ski Club and Follonica Hockey. The children between the ages of six and ten gave life to a fun afternoon, with some matches being played that the young athletes loved. The goal of making them enjoy their favorite sport has been achieved and that’s the important thing. The show was attended by many relatives, parents and friends. All the club and ball enthusiasts attended ten eight-minute mini-games on time, with the red and white kid, along with the white and blue “cousins”, fighting from start to finish without sparing. The rink skating club presented a group of sixteen children, with four girls, trained during the year by Pablo Nelson Saavedra: Francesco Mizzabarba, Tommaso Spinosa, Pietro Spinosa, Diego Croce, Alessandro Marinoni, Ettore Chaggi, Elena Romani, Viola. Ogas, Leonardo Cipriani, Riccardo Lo Monaco, Lara Lo Monaco, Gabriel de Lillo, Mattia Di Gianfilippo, Aurora and Antonio Maviton, Alex Alassia.

Emilio Minchella, the always available Under 11 coach for his club, also stepped in to help the Edilfox captain. Follonica, who had 12 children, was trained by Marco Panini with valuable help from Catalan striker Didac Lubet.