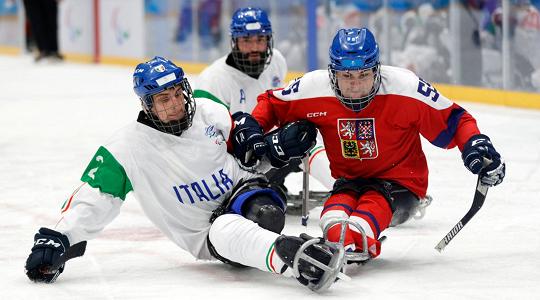 “A heartbreaking victory to close the Beijing Paralympics in the best possible way.

The Blues never dominated Massimo da Rin, who struggled against the Czech Republic but never gave up and never gave up, having equalized at the end of normal time, won 4-3 in overtime, and finished the tournament in fifth place.

Nice comeback match compared to the 0-5 score suffered by the same opponents in last Saturday’s opener at the National Indoor Stadium,” the Paralympic Committee wrote in a note.

“The first half fought hard with the Azzurri who had to defend themselves at the end of the first half thanks to the usual inexhaustible Andrea Macro, who saved on the goal line a few seconds of sirens. The advantage in the 24:11 minute with a superb shot straight into the corner of the post, leaving Room for rival goalkeeper Michel Fabenca.

It was the first time in the tournament that Italy were able to score goals in a power game. But the joy did not last long because Alex O’Haar found a 1-1 draw thanks to a sarcastic shot that beat Julian Castleter in the 27:24 minute.

In the third half, the Czechs still led (2-1) in the 37:05 minute with Miroslav Nowotny, but Rosa was not there, and with her personal double, she put the match in a hasty (2-2) tie. Fastest of all to dismiss Fabinka at Larch’s conclusion. 45 seconds left, it was a great game for Michel Gere and a cold shower for Italy: 3-2 and it looks like it’s over.

But never give up on Azzurri and so Da Rin takes Kasslatter from Kasslatter, and in the last post, he’s paid off. Rosa passes the puck to a macro which leaves the ball 3-3 starting just 12 seconds after the end of normal time.”

READ  Lugano is also on the right track with Koskinen, Granlund and Kaski