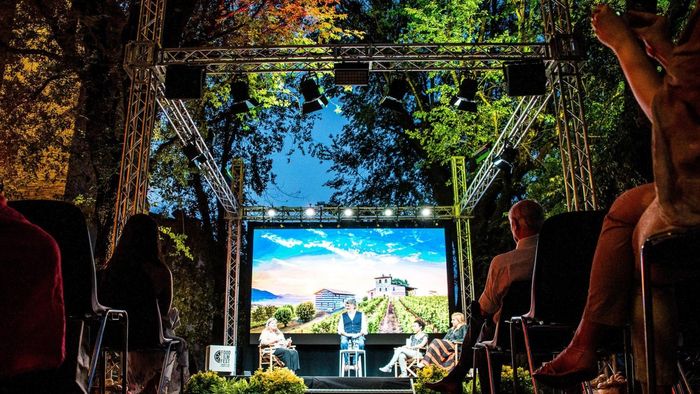 A multi-sensory festival that will accompany participants in the discovery of art through the four senses: a spectacle of the many national and international films nominated for the festival, a tasting and aroma tasting of the many tastes offered by the Bergamo Chamber of Commerce, Coldiretti Bergamo, Slow Food Bergamo Orobic Valleys Bassa Bergamasca and Ascom Bergamo and finally listening to Music – a special theme for the 2022 edition. The opening of the festival will be at 6.30 pm, followed by an aperitif to discover the flavors of the region that Coldiretti Bergamo has to offer. Farmhouse Cascina S.Fermo di Calcio. At 8 pm the meeting will begin: Creativity and Collaboration among UNESCO Creative Cities Clusters. Guests of the evening: Claudio Scinelli, Head of the Department of Culture and UNESCO of the Municipality of Bergamo, Silvano Stracini, creator of Rossini Gourmet and consultant for the promotion and promotion of Pesaro culture. At 8.30 pm the speech “Opera nourishes the soul: a journey through opera, cinema and food” by Francesco Micheli and at 9.15 pm a special interview with actor and director Ricky Tognazzi on the topic “Ugo Tognazzi”. The Crazy Desire To Live”, which will be followed by the screening of “The Mad Desire To Live” directed by Ricky Tognazi.

Food Film Fest is a project designed in 2014 by the cultural association Art Mayora and the Bergamo Chamber of Commerce, with the participation of Coldiretti Bergamo, Slow Food Bergamo Valley Urubishi Pasa Bergamasca and Ascom Bergamo. Five days of performances, video previews, food talks and workshops in the historic heart of the upper city, in Piazza Macerone, a natural open-air theatre, promoting the values ​​of sustainable development and concern for the environment through nutritional storytelling. Entry to the festival is free, three categories in competition: Documents, Animations and Films for 5 days of shows, video previews, food talks and presentations.
event program