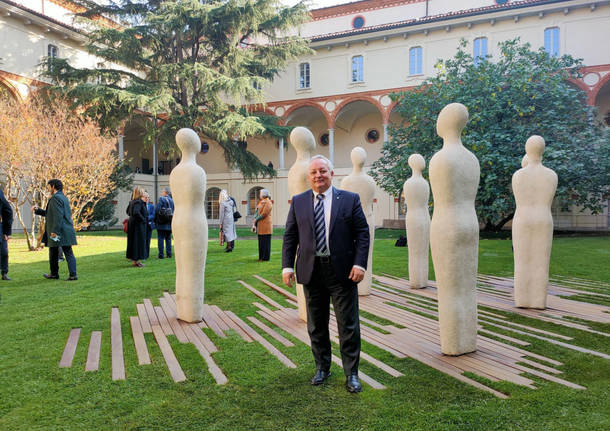 The Lombardy region contributed 500,000 euros for the renovation and equipping of the monasteries that include the installation “I Sette Savi” by Fausto Melotti. The sculptures, starting Friday, October 29, will be on display inside Milan’s National Museum of Science and Technology in the garden of the monumental building’s first monastery.

The project is part of the funding provided by the region of Lombardy Al National Museum of Science and Technology In the context of regional cultural policies that saw the realization of many interventions including the opening of studio collections to the public, the strengthening of the cloisters and gardens of the monumental building, now enriched by the installation of the outstanding Italian-style representative artist and the cultural scene of Milan in the twentieth century.

Serious and mysterious – announced the regional advisor for autonomy and culture, Stefano Bruno Galli – the group of seven stone giants by Fausto Melotti has finally found a stable and worthy home. Sixty years after its realization, and thirty-five years after the death of the great artist from Rovereto, this monumental work comes back to life after long and turbulent travels. An operation carried out thanks to the concrete intervention of the Lombardy region, which therefore continues to support the redevelopment and strengthening of the National Museum of Science and Technology ».

The Museum, whose mission since its founding has been the dialogue between art, science and technology – Saturday 30 and Sunday 31 October and Monday 1 November at 2.30 pm and 3.30 pm – is organizing a 30-minute private tour, together with the curator, in which it will be possible to trace the history of the Museum and learn about ” I Set Savi”.

The visit is included in the museum admission ticket, with reservations required at the time of purchase at www.museoscienza.org