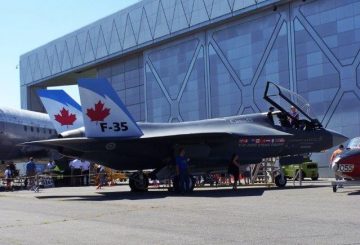 In a statement, Lockheed Martin said, “The F-35 strengthens Canada’s operational capabilities with its allies, as a critical component of operations with NORAD and NATO. The F-35 is a critical mission space asset for 21st century security and gives pilots an edge over any adversary.” This enables them to complete their mission and return safely.

Canada launched a “Future Combat Capability Program” tender process in 2017 to acquire a successor to the Boeing CF-18 Hornet fighter jet. A formal request for proposals was issued to industries in July 2019 and closed in July 2020 The exam was held in March 2022.

Canada bought some Australian F/A-18 fighters to supplement its CF-18s, whose operational life will be extended to 2032: the F-35s will be equipped with arctic equipment such as parachute-brake to operate on narrow and icy runways.

Currently, the F-35 operates from 27 bases around the world and nine countries use it for domestic operational missions. More than 890 F-35s are in service, with 1,870 pilots and 13,500 aircraft trained.

(With sources Lockheed Martin and Canadian Ministry of Defence)