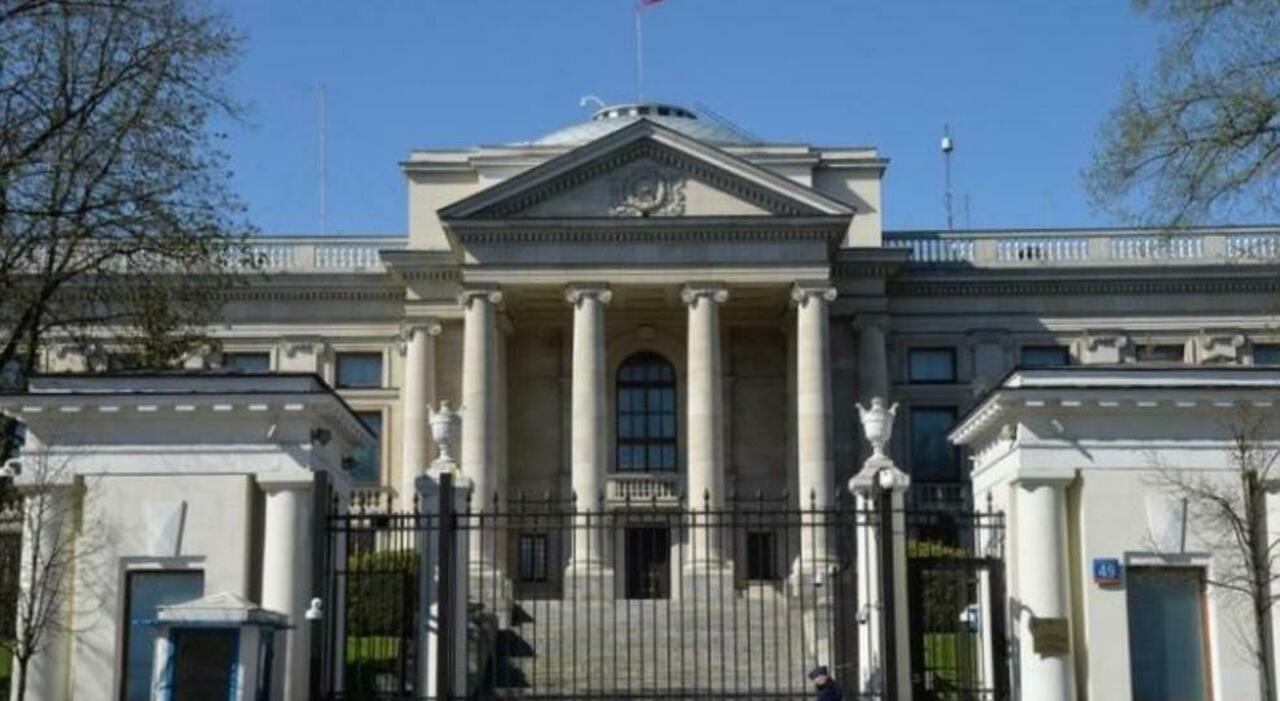 A Molotov cocktail targeted the Russian Embassy in Warsaw

The Russian Foreign Ministry condemned the throwing of a bottle Molotov against his embassy Warsaw. “Unknown persons tried on two occasions to attack our diplomatic mission in Warsaw,” says A.S communication by Deputy Speaker Ivan Nechaev, where he also complained that the Polish police did not intervene when a “bottle with incendiary contents” was thrown. “We call on Poland to guarantee the security of Russia’s diplomatic and consular missions,” said the statement, which called for an investigation and the arrest of those responsible.

The International Atomic Energy Agency’s board of governors has adopted a new resolution calling on Russia to withdraw from Ukraine’s Zaporizhia nuclear power plant and halt its actions against nuclear sites, diplomatic sources said. Two diplomats said the text submitted by Canada and Finland was approved by 24 of the 35 countries on the council. Russia and China voted against.

The death toll from the Russian missile attack on Vilnyansk in the Zaporizhia region was at least seven. Rescuers have found the bodies of seven people under the rubble of a building hit by a Russian missile in Vilnyansk. This was stated by the deputy head of the Ukrainian presidential office, Kyrylo Tymoshenko, Ukrinform reports. “Dozens of rescuers, volunteers and public utilities are still working at the site,” he added. The bodies of seven people have been removed from the rubble.”

Kuleba: Our experts have come to Poland to get the missile.

Ukrainian Foreign Minister Dmytro Kuleba announced that he spoke today with his Polish counterpart Zbigniew Rau. “Ukraine and Poland will cooperate constructively and publicly on the incident caused by Russian missile terrorism against Ukraine,” he said on Twitter. Our experts are already in Poland. We expect them to quickly reach the site in cooperation with the Polish forces.” Zelensky had yesterday requested the participation of a Ukrainian team in the investigation led by Polish and American experts in Przyodo, four miles from the Ukrainian border.

CNN: “The United States is running out of weapons being sent to Ukraine”

The United States is “short” of weapons and ammunition after supplying Ukrainian forces for months. Three officials reported this to CNN. Since the start of the Russian invasion last February, Washington has sent Kyiv $18 billion in military aid. The Pentagon has long been keen to replenish US supplies, and announced a few days ago that it had awarded contracts worth more than $520 million to defense giant Lockheed Martin to replace missile systems sent to Ukraine.

Tagani: A new attack on Kyiv is a bad sign

“Today the signs are negative,” because “the new Russian attack on the Ukrainian capital is a bad signal from Russia.” Foreign Minister Antonio said so Tagani In Farnesina, in response to a question from journalists about Ukraine.

Moscow: We will not give up the lands annexed by Ukraine

Russia does not intend to give up territories in Ukraine that have recently been annexed to its territory. This was stated by Deputy Foreign Minister Sergei Ryabkov in a television interview filmed by TASS agency. “We are unwavering in our position, which definitely provides for the integrity of our territory with all the newly accepted territories,” Ryabkov said.

Zelensky: Peace can be achieved with more pressure on Putin

Peace in Ukraine is a global need. I emphasize: this is not a temporary pause, not an illusion of peace with which Russia is trying, only to prepare for a new phase of aggression, but real peace. I know it can be achieved. But for this we must maintain global unity and continue to support our struggle for freedom. It is necessary to protect global honesty and increase pressure on Russia for terrorism. It is necessary to maintain global rationality ». With these words Ukrainian President Volodymyr Zelensky He addressed attendees at the Bloomberg New Economy Forum, and he reports on Telegram.

Erdogan: Russia and the United States will refrain from using nuclear weapons

Turkish President Recep Tayyip ErdoganAfter the US and Russian intelligence chiefs met Monday in Ankara, it received information from the head of Turkish intelligence that both sides would refrain from using nuclear weapons. Report RIA Novosti. Erdogan said that he is counting on the continuation of meetings in Turkey between the intelligence chiefs of the Russian Federation and the United States

Turkish President Recep Tayyip Erdogan He said that Italy wants to quickly resolve issues related to possible cooperation with Turkey and France on the Samp-t missile system. Italian Prime Minister Giorgia Meloni “said that there are still some technical problems, by resolving them, France, Italy and Turkey will solve the Samp TV issue in a short time,” Erdogan said, according to Anadolu Agency, referring to an interview with Meloni. During the G20 in Bali, Indonesia.

Erdogan thanks Putin for extending the wheat deal

Turkish President Recep Tayyip Erdogan He thanked Russian President Vladimir Putin for his “will and contribution” to extending the wheat agreement for a period of 120 days. Report RIA Novosti.

Koleba hears Blinken: The Russians are responsible for the missile in Poland

Ukraine’s foreign minister, Dmytro Kuleba, said he had a telephone conversation this morning with his American counterpart, Anthony Blinken, with whom he agreed that the Russians were “fully responsible for his missile terrorism.” And its consequences on the territory of Ukraine, Poland and Moldova. ” Kuleba himself writes it in a tweet.

Explosions were reported in the occupied city of Dzhankoi Crimea. According to local media, a Russian airport was hit. The explosions were heard late yesterday evening, Ukrenform said, citing local Telegram channels.

Extension of the grain export agreement for 120 days

A Ukrainian minister said the international agreement allowing the export of grain and other agricultural products from Ukraine’s ports across the Black Sea has been extended for another 120 days.

Russian raids on all of Ukraine

new raids Russian bombing hit cities across Ukraine, according to Ukrainian official sources. “Two cruise missiles were shot down over Kyiv. We are collecting information and checking if there are any casualties,” said a source in the Ukrainian capital. Authorities in the cities of Dnipro and Odessa also reported Russian attacks.

Kyiv: 400 Russian soldiers were killed in one day

there Russia And it lost 400 men on the last day, bringing the number of losses among the Russians to 83,110 since the day of Moscow’s attack on Ukraine on February 24. This was announced in the daily bulletin of the General Staff of the Armed Forces of Ukraine, which has just been published on Facebook, which publishes figures that cannot be independently verified. According to the Ukrainian army report, Russian losses today will be about 83,110 men, 2,878 tanks, 5,804 armored vehicles, 1,860 artillery systems, 393 multiple rocket launchers, and 209 anti-aircraft defense systems. According to the bulletin, which indicated that the data is being updated due to the fierce fighting, the Russian forces also lost 278 aircraft, 261 helicopters, 4,362 vehicles, 16 naval units, and 1,531 drones.